Notes :
(1) Tour included an option to visit the narrow-gauge Fairbourne and Bala Lake Railways. Coach company Regina of Bleanau Ffestiniog transferred passengers from Fairbourne to Llanuwchllyn & Bala to Barmouth. Motive power on the FR was 'Ernest W.T. Twinning' and on the BLR was 'Holy War'. Passengers not on this option were able to travel right through to Pwllheli & return on the DMU. William Shelford further adds: The tour sheet gives six options for this tour, which included a single journey on the Vale of Rheidol Railway and Talyllyn Railways, or a trip on the Festiniog from Minfford to Tanygrisiau and return.
(2) A return trip over the Talyllyn Railway (Tywyn Wharf – Nant Gwernol – Tywyn Wharf) was made behind No.3 'Sir Haydn'.
(3) Ken Robinson comments: I’m trying to confirm the above Cambrian Coast Express tour which took place on this date. I have photographs of a tour at Porthmadog which I believe to be this one. The locos match i.e. 2x25 (but no numbers), the date I have is April 1980 (but may have been late March), but I saw no trace of a DMU as mentioned above. This was also I believe to be the last loco hauled passenger train for some time north of Barmouth Bridge as the discovery of the worms in the timber piles had been made that same week (or thereabouts) by civil engineers. All loco hauled trains were banned over the bridge as from w/e 12 April 1980. Can anyone help/confirm please? 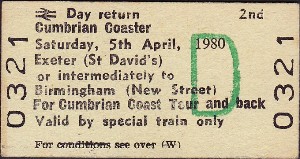