Notes :
(1) Mel Holley comments: the last visit by a Hastings DEMU to Shoeburyness was by 1005 with an LCGB Railtour on 8 November 1969 and Fenchurch Street was last visited by a Hastings DEMU (1007) on 12 September 1970 on a Rail Tours Syndicate railtour.
(2) Mel Holley adds: the train ran to time outward. On the return it left around 10 late, and then we were delayed in the Pitsea area because the line was closed at police request - the police helicopter had been deployed in the search for an armed suspect. We were 30 minutes down at one point, but thanks to some clear running and some scheduled recovery time we were back to 23 minutes down at Clapham Junction, 12 down at Bromley South, and on time thereafter.
(3) John Clifford comments: The original advertised route between South Tottenham & Gas Factory Jn was to have been: South Tottenham - Lea Bridge - Stratford - Bow Jn - Gas Factory Jn. This was changed due to a pathing problem in the Stratford area.

Sources : Mel Holley (on the train throughout) & John Clifford (joined the outward leg
at Bromley South, returned to Clapham Junction) 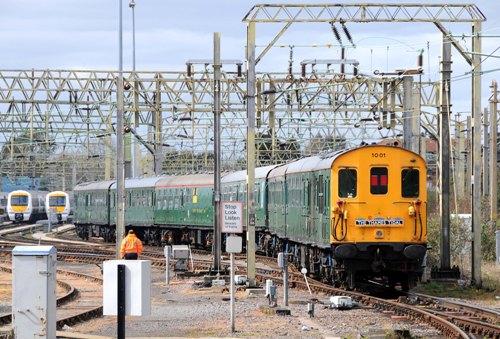