Notes :
(1) Banked by 47786 from Weymouth up Bincombe Bank. 47786 removed from train at Wareham and was booked to run light engine to Poole before returning to Weymouth.
(2) Martyn Thresh comments: On leaving Poole 34067 started slipping soon after coming off the causeway across Parkstone Bay. Speed very much reduced by the time Parkstone station was passed and stalled at 09.30 with the loco under the road bridge at Sandecoates Road and the rear of the train some 150 yards from the east end of the platform of Parkstone station. Hand sanding was carried out and several attempts were made to restart which only resulted in the train rolling back a short distance each time.
(3) Martyn Thresh comments: 47786 had run to Poole and should have been available as planned but started its return journey to Weymouth early and was stopped at Wareham before being returned to give assistance. It was reattached to the rear of the train and two or three attempts had to be made to get the train moving again at 10.50. In the meantime it is reported that at least two of South West Trains' services were terminated at Poole. 47786 remained attached to the rear for the rest of the journey to Paddington giving assistance restarting from station stops and where required.
(4) 47786 on rear.
(5) 34067 ran with Great Western style 'Z81' headcode board.
(6) This tour was originally advertised to start from/terminate at Swanage. 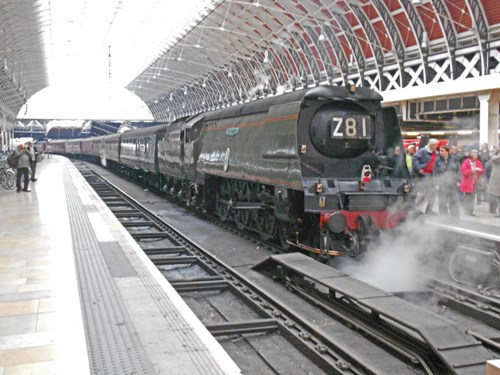