Notes :
(1) Route & traction confirmation required. Richard Maund comments: The 'Daily Express' advertising in their issue that morning contains the words: 'British Railways are issuing combined rail and admission tickets at stations within a 60 mile radius of Gatwick. Forty eight special trains will leave Victoria and London Bridge for Gatwick between 9 a.m. and 2 p.m. and 15 special services from the South Coast. Both railway stations at Gatwick adjoin the Airport.' That final sentence indicates that both the old Airport station (formerly Tinsley Green) and the Racecourse station (site of the current Gatwick station) were in use. Aerial activities at Gatwick were to be wound down in autumn 1949 and it seems almost certain that the last public use of Gatwick Racecourse station, in conjunction with air activities, would have been this event. For the following year, the event was replaced by the RAF Display (the first since 1937) held on 7 and 8 July 1950 at Farnborough. 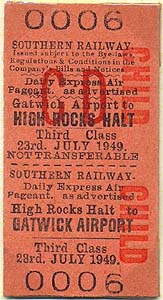