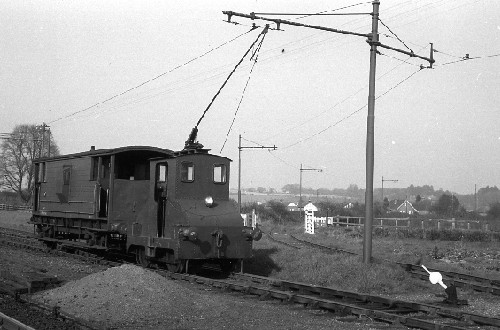 The train in the exchange sidings at
Hellingly station (photo: David Pearson)

From the collection of David Pearson

The line ran from Hellingly station exchange sidings in a north easterly direction for just over a mile to Hellingly Hospital. It was built in 1899 to carry building materials for the construction of the hospital, and was electrified at 500v DC using tramway style overhead on the hospital's opening in 1903. A twelve-seater tramcar was used for the carriage of staff and visitors, and a 14hp electric loco was provided for freight. The origin of these vehicles is obscure, but it is believed that they were built in Germany as the hospital's electricity supply was installed by a German firm.

The passenger service was withdrawn in 1931,  but the freight traffic survived until March 1959. Since the early 1950's the only traffic appears to have been coal for the hospital's power plant. The conversion of the power plant to oil firing was the reason for the line's closure.

The tour's passengers travelled in an ex LMS brake van which was propelled on the outward journey and hauled on the return.