Notes :
(1) Route confirmation required- above is from booked timings. Tour itinerary described this as the 'Rail Tour to Catrine and Muirkirk' on the cover page but as 'Land of Burns Rail Tour' on the next page...and the route map in the same itinerary carried a head and shoulders picture of Robert Burns with 1759 one side of his neck and 1959 on the other with 'Burns Country Rail Tour' in a circle round the image...so take your pick!
(2) Andrew Fairholm suggests the 'Land O'Burns' tour uploaded on 09/09/1958 is in fact this tour. 40574 was believed used throughout, not 256 'Glen Douglas' as originally uploaded. Ian Clark (SLS) also confirms the running of this tour and use of 40574 (was advertised to use a CR 3F 0-6-0). 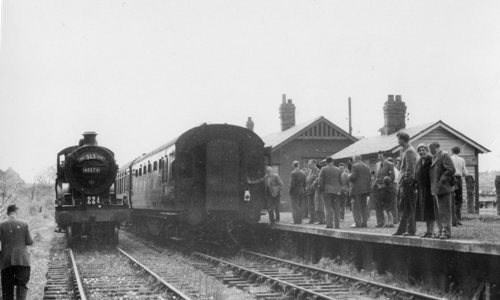 40574 running round at Catrine (photo: The John Debens Collection) 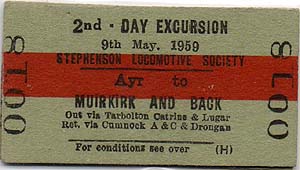 Timings (Booked Only)
(from John Debens)