Notes :
(1) Last day special on the Shropshire and Montgomeryshire Light Railway. Originally booked to start at Shrewsbury Abbey (at 11.45am) but due to the line being cut the tour started at Shrewsbury Hookagate and termined at Kinnerley with road transport being used from/to Shrewsbury Abbey. Birmingham members with half-day excursion tickets were able to use the 6.30pm service train from Shrewsbury to return to Birmingham.
(2) Route confirmation required - above is from booked times. Rail journey route was originally uploaded as: Kinnerley - Shrewsbury Hookagate - Llanymynech - Kinnerley but revised following receipt of timing sheet - did actual events on the day differ from that as booked? Tour seen on the Severn Bridge at Shrawardine during a photo stop, hauled by 193, was it used throughout? 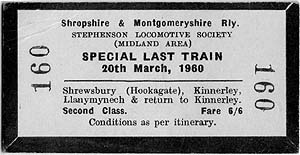