Notes :
(1) Distance travelled was 1.5 miles each way on Hepworth Iron Co. railway which was laid in he 1860s to connect the works with the M.S.& L. Railway between Penistone and Dunford Bridge. The route, though short, climbed at 1 in 25 out of the Don valley, and passed through a tunnel about 450 yards long.  It closed in August 1960. Tour participants were to arrive into Penistone by specific service trains from various locations and from there to the works a special road coach was laid on. 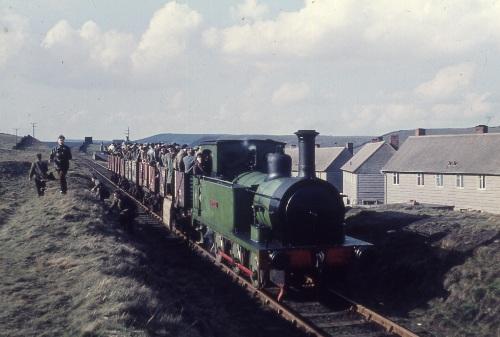 'Hepworth' and its train of more than 100 passengers at the summit of the
line in Crow Edge village. The works is over the ridge in the background.
(photo: Mike Swift)

Timings (Booked Only)
(from John Debens)