Notes :
(1) Route confirmation required. Photographed at Thetford, Barnham, Seven Hills, Ingham and Bury St Edmunds. Originally uploaded as having been run by the Cambridge University Railway Club. Gerald Brown comments: A collection of R.C. Riley negatives (RCR 14857 to 67) held by the Transport Treasury evidence this special, at least between Thetford and Bury St. Edmunds, which should be the final passenger train over that line, which closed on 27/06/1960. It was powered by 32A J15 65469. Presumably the leg from and to London was made in other stock than brake vans (service trains maybe, to ???)? 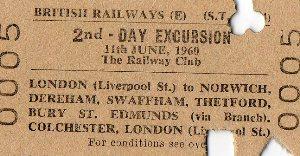