Notes :
(1) A photographic souvenir of the SLS/RCTS Scottish tour (12th - 17th June) also included a description of this tour. It reports the train 'diverted from the NB main line at Portobello West Jn and thence by a series of complex freight spurs prior to rubbing shoulders with the main line again at Monktonhall Jn before making the steep ascent of the colliery lines to Smeaton and Ormiston'. It is thought the new line from Millerhill Yard Jn to Monktonhall Jn was not opened until 1961 therefore the routing is likely to have been: Portobello West Jn - Niddrie North Jn - Wanton Walls Jn - Niddrie East Jn - Monktonhall Jn, but confirmation of this is required.
(2) The photographic souvenir reports 'Heading back to Edinburgh we experienced several delays due to bad steaming, and after a long pause at Niddrie West we continued round the outer circle suburban line to Waverley without mishap'. Keith Thompson confirms stops during the latter stages of the tour at Inveresk, Monktonhall Jn, Wanton Walls Jn & Niddrie West Jn on account of being short of steam. 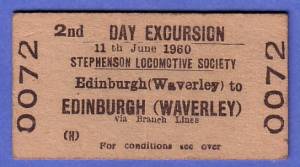