Notes :
(1) Route confirmation required. The use of CR 123 was given in a description of the SLS/RCTS Joint Scottish Railtour which paused at Kirkliston on the same day. Was Reporting Number 371 used for the leg hauled by CR 123?
(2) Photos on the Internet suggest a B1 hauled the train from Alford to Grimsby Town, identified as either 61166 or 61168. The latter is considered more likely based on its depot allocation at the time (Immingham based and the photos showing the B1 concerned had trademark Immingham white painted smokebox door hinges, 61166 being Mexborough based). Did the same loco (or a different one) return the train from Grimsby Town in the evening, or did 60022 work through? 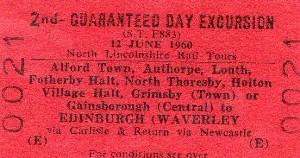