Notes :
(1) A photographic souvenir of the SLS/RCTS Scottish tour (12th-17th June) also included a description of this tour. It reports that 61995 required some attention at Fort William shed for hot axle boxes and departure for the return trip was delayed due to station congestion. Further significant delays ensued between Crianlarich and Stirling due to waits in passing loops and arrival into Glasgow Buchanan Street was some 70mins late.
(2) Tony Davies comments: the delay at Tyndrum on the outward leg was because No.44974, assisting No.44702 on 6.30 a.m. ex-Mallaig (crossed at Tyndrum), had failed at Bridge of Orchy.
(3) Tony Davies comments: At Crianlarich Upper 61995 ran round, reversed out, crossed to down line and forward to Crianlarich West Junction.  Here the crew had to wait, for half-an-hour, until the 17.15 up Oban (No.45356) had passed before running round again. There was a short stop at Crianlarich Lower Station. 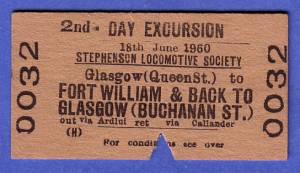