Notes :
(1) Originally uploaded routing suggested the train traversed the Denton branch, but David Wignall confirms this did not form part of the final tour routing so it was presumably dropped during the planning stages. 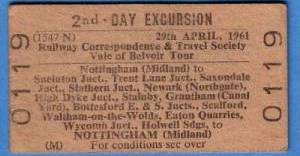