Notes :
(1) Last train over the Paddock Wood to Hawkhurst line and K&ESR Robertsbridge to Tenterden line.
(2) David Pearson comments: This was an extremely well filled tour. It was originally planned to have a load of seven Hastings line restriction "0" corridor vehicles. When applications flooded in the LCGB requested more vehicles, but as the line had gone over to DEMU operation it seems that there was no more corridor stock of the right loading gauge available. To accommodate all those wishing to participate two ex SE&CR non-corridor coaches, known as "S 100's"  were added to the formation. In a letter sent out with the tickets, passengers with tickets numbered over 250 were requested to use the non-corridor stock which, it was estimated, would be filled only with eight passengers per compartment instead of the twelve seating capacity. Because of the increased load the train was double headed throughout, except on the Kent & East Sussex section where only seven vehicles were used, and the train was "top & tailed." Due to the response received all passengers received a refund of 2/- per head, which was handed out when tickets were inspected. In a letter given to passengers the identity of each of the corridor vehicles was quoted. Leaving Victoria the consist was: 2x locos, 2x S 100's, BSK3687, CK5601, Buffet Car 7874, CK5598, BSK3690, CK5592, BSK3680. At Robertsbridge the last two were detached for the trip to Tenterden and back so that the two S 100's could be filled up with the displaced passengers. Even the names of the engine crews were given to passengers. I think they must have been enthusiasts too as there were some exhilarating performances, particularly on the down grades on the outward leg between Tunbridge Wells Cent. and Robertsbridge. The leading engine on this section was "H" class tank No. 31308, and looking out of the window at the speed of the coupling rods - well it was almost frightening!
(3) 32670 on the rear.
(4) 32662 on the rear. 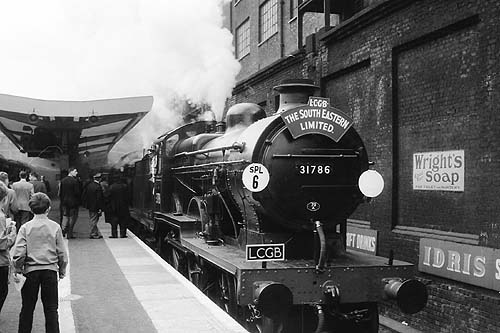 Victoria station, at the start of the days outing (photo: David Pearson) 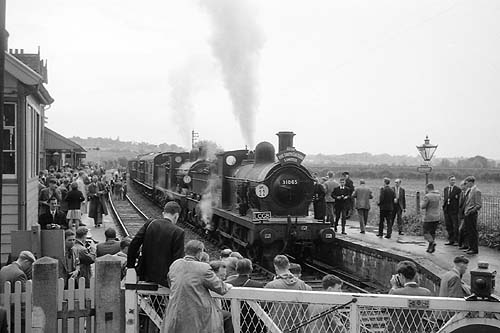 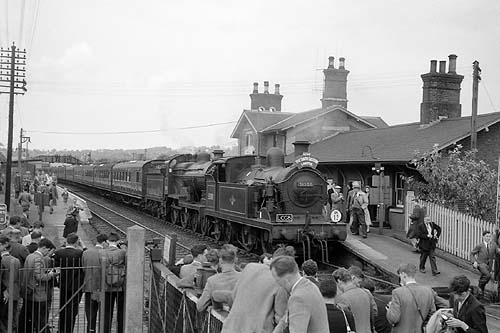 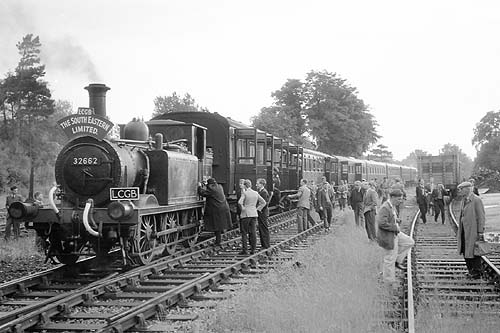 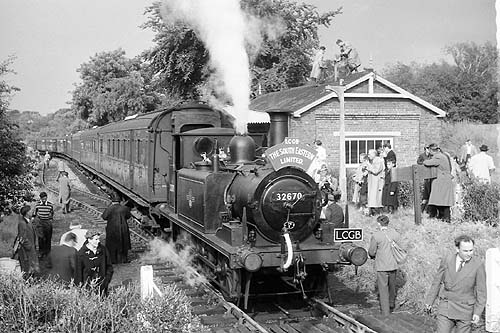 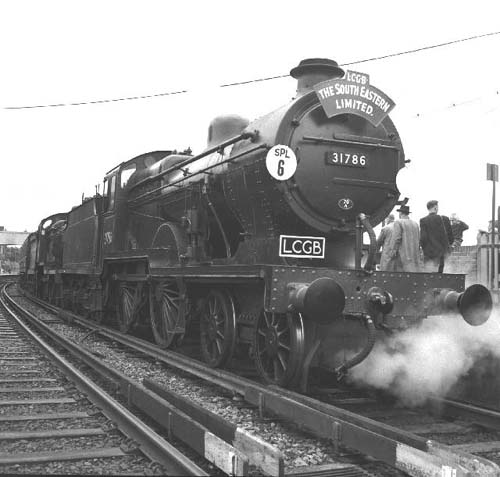 31786 pauses at Wateringbury station for a photo-stop.
photo : John Broderick (courtesy of www.30937.co.uk) 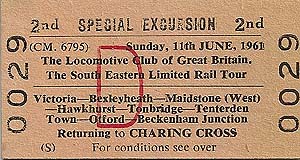