Notes :
(1) Propelling Move (from P2 [UF] across the 'ladder' at North Jn to the Up Slow).
(2) The advertised route outward for this train was via the Swansea District Line & Hendy Jn.
(3) The advertised route return for this train was via the Abbey Foregate Curve.
(4) The advertised loco change points for this train were Cardiff General & Craven Arms.
(5) Bus transfer to the WLLR for a single trip between Llanfair Caereinion & Sylfaen.
(6) Gordon Lacy comments: This train was the first railtour to be operated by the Main Line Steam Trust Ltd. It was unfortunately notable for what didn’t happen, rather than what did. It was advertised as a Class 44 to Cardiff, a Class 37 from Cardiff to Craven Arms and an unspecified loco, thereafter. Needless to say, the clientele were NOT amused by the lack of class 44! The official 'excuse' was that there were no class 44s available on Toton – right! The advertised route beyond Port Talbot was via Llangyfelach & Hendy Jn. However, we went via Neath & Cockett, reversing and finally getting our overdue loco change at Llandeilo Jn! Those who had booked seats to be behind the loco(s) virtually throughout, were even less amused! At least the 37 went through to Shrewsbury. The appearance there, of yet another Brush 4 (esp. to Welshpool), did not go down well, either! The final straw for many, was not getting the advertised Shrewsbury Avoider ‘in the book’, as the train ran into Shrewsbury for the loco to run round. All said, a very disappointing trip! 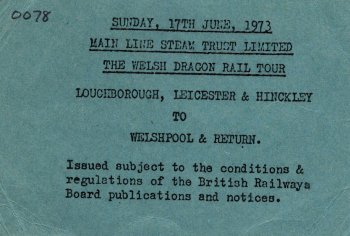