Notes :
(1) E3126 failed.
(2) plus E3126 dead-in-tow.
(3) For off-train option to the Severn Valley Railway.
(4) Due to engineering works on the direct route, the train retraced its route to Worcester before heading south to the final destination, Barry.
(5) Arriving 90 minutes late, the train returned almost immediately.
(6) Originally uploaded as having run on 20th August, in error. 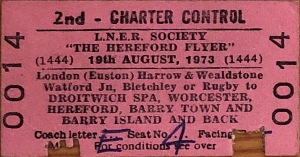