Notes :
(1) It was planned to stand 4472 & 6000 side by side in the fish jetty at the Hereford end of Newport Station from 11.15 onwards to await the arrival of the special and the Mayor of Newport was to toss a coin at 12 noon to decide which loco would lead to Hereford - British Rail were be selling souvenir platform tickets for viewing the locos.
(2) 4472 & 6000 changed places and were watered from a fire brigade tender.
(3) 65mins were allowed between Woofferton & Craven Arms and was intended for a Photo stop and an acceleration test.
(4) 6000 was detached for watering and turning. 4472 and the 5 Bulmer Pullmans were detached to go forward in the evening to Manchester via Chester & Warrington on the first leg of a 14 day tour of Northern England by the cider train & Flying Scotsman (further details required). 6000 and an FO were attached to rear of 10 bogies for return journey.
(5) A published photograph of 4472 leading 6000 entering Hereford northbound stated the tour name to be 'Western Venturer' - confirmation required. 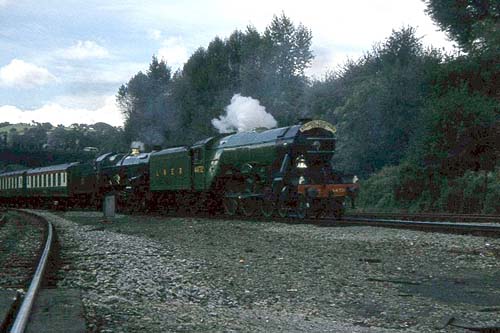