Notes :
(1) Alan Costello comments: This train coincided with Atlantic Venturers Express (Newport to Shrewsbury). At Pontypool Road we detrained and the stock pushed back into siding. After about 10mins the sound of kettles were heard and Flying Scotsman double-heading with 'King George V' passed through hauling the Bulmer Pullman coaches. We then went on to Hereford where the 2 steamers were changing places. After they left with 'King George V' leading we left and, after short stop at Worcester, carried on to Didcot for a visit to the Railway Centre.
(2) Gordon Lacy comments: Despite comments in the (limited edition) brochure, that it was unlikely that any high speeds would be attained, nevertheless, 94mph was achieved after Twyford (mp32½-33) & 96mph at Steventon! 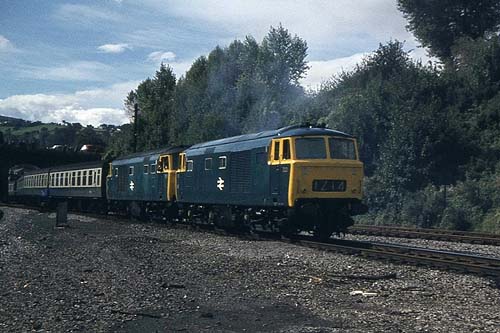