Notes :
(1) A break at Maiden Newton allowed passengers to take a ride on the service train on the Bridport branch on it's last day of operation (train used by John Broderick was formed using DMU's 55033, 51345+59497+51387). Chris Totty comments: there was time to make two return trips to Bridport if you wished. I managed Maiden Newton - Bridport - Toller - Powerstock - Maiden Newton. Also the tour train was stabled in Maiden Newton Coal Yard during the layover; certain persons managed to board it there and travel into the station to the envy of certain others!

Sources : John Clifford (on the train throughout) & John Broderick 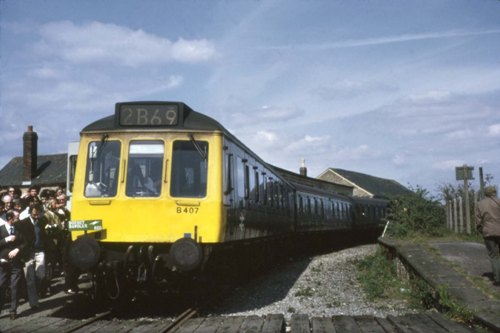 Though complete with headboard it is assumed this is a service train seen
here at Bridport station which tour participants travelled on during the break
the tour took at Maiden Newton (photo: Chris Totty) 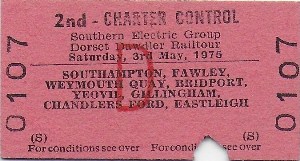