Notes :
(1) Howard Parker comments: The train started at Wellingborough and it is assumed that the locomotive between there and Leicester was the same as between Leicester and Nottingham. This excursion included a cruise on Lake Windermere. Road coaches were provided between Grange over Sands and Bowness.  Rail passengers were split into 2 groups with first group moving to Bowness soon after arrival and the second group having an extended break at Grange over Sands first, travelling to Bowness later for the second lake cruise. Being in the second group had the bonus of seeing 92220 Evening Star arriving on a special train and returning light engine to (presumably) Carnforth for servicing. 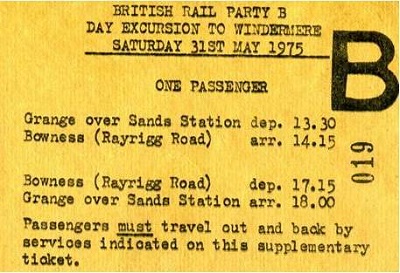