Notes :
(1) John A. Thickitt comments: With 13 carriages (plus a G.E. saloon) behind the tender, it was perhaps not surprising 4472 had great difficulty with the northbound departure from York. The engine replaced the A4 here, and was required to start the train round the curving track beside the shed. 4472 stalled many times, each occasion preceded by dramatic wheel slips, with charcoal-grey smoke copious and constant. The driving wheels' eventually 'caught' when the train reached straight track beside the yards'. I estimate this latter event took about five minutes from the 'right away' at the station. Passing the roundhouse I saw four or five older drivers' (who were of an age to have driven Pacifics') had come to the edge of the yard to watch proceedings; eavesdropping on their conversation may have been interesting! Included in the tour literature was: "On arrival at Sheffield it now seems unlikely that the two restored L.N.E.R. carriages will be added to the train as it will already comprise thirteen vehicles in order to accommodate the maximum number of passengers". (The formation included a Buffet Car). Possibly the above was connected to the souvenir programme speculation: "The run from Sheffield to Newcastle on September 28th is likely to be the last steam hauled run on an Inter-City main line.". 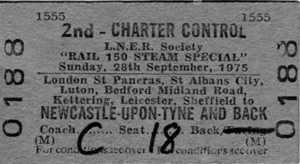 Timings (Booked Only)
(from John A. Thickitt)