Notes :
(1) It was originally reported that the use of 55003 on this date was taking advantage of the fact it was on the WR undertaking high-speed tests prior to the introduction of HSTs on the region however this has since been challenged; Deltics 55007 and 55001 were involved in dipped rail tests on 12th and 19th January 1975 and it is said these tests that probably made this tour possible. 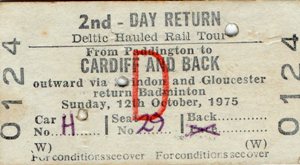 Sources : Alan Osborn (on the train throughout) & Nige Paine