Notes :
(1) Some sources had suggested the Pembroke Dock branch was covered before Milford Haven however Will Powrie confirms this was not the case. 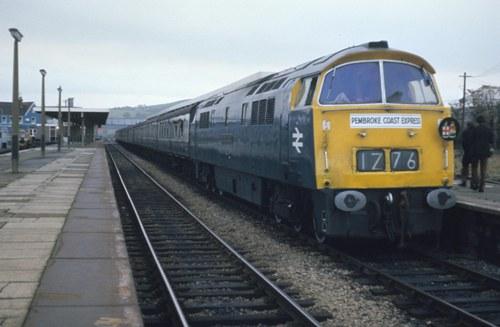 Tour Review
(by Will Powrie)

The Pembroke Coast Express was an opportunity to travel behind a Western over most of the passenger railway lines in southwest Wales, including the main line to Fishguard Harbour and the branches to Milford Haven and Pembroke Dock. It was initially advertised in the mid-August 1975 edition (no. 1003) of Western Courier, the magazine of the Western Locomotive Association, as follows;

The reasoning behind the last of these was that British Rail then intended to start removing or isolating train heating boilers from the Westerns in March 1975, and reduce the size of the fleet to 30 at the end of the summer timetable and to 15 by the end of the year. Had this plan been followed, the summer of 1975 would have been the last season for Western-hauled passenger trains. However, the (un)reliability of the replacement diesel-electrics meant that, fortunately for the Westerns’ army of followers, the plan slipped by about a year.

I travelled from Olton (near Birmingham) to join the train at Crewe. Arrival in Cardiff was about 03.00; the duff came off and D1013 Western Ranger took over for the journey into west Wales. At the time, D1013 was the official railtour locomotive; a mantle it would later cede to D1023 Western Fusilier.

It was a pleasant day, with great scenery and a relaxed feel, and numerous opportunities to get out and take photographs at termini (Fishguard Harbour, Milford Haven and Pembroke Dock), reversal (Whitland) and passing points (Tenby).

Most of those lines I had not covered before and have not been on since, although in 2013 I went by train to Carmarthen then cycled to Fishguard, Pembroke Dock, Tenby and back to Carmarthen.

One slight disappointment (although I think this had been decided and was known in advance of the railtour) was that Western Ranger was not allowed to run back to Crewe on the Central Wales line. BR were a bit prissy about Westerns going off region then, so D1013 was detached at Carmarthen and replaced by 37177 for the final leg.

Timings (Booked & Actual)
(from Will Powrie)