Notes :
Howard Parker comments: Leeds was an advertised alternative destination to York. Noted whilst at York was LNWR 790 Hardwicke and coach which had been brought from the Railway Museum into the Scarborough bay platform at York for a filming contract. 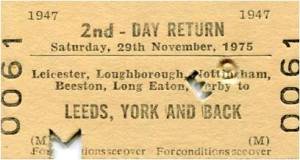