Notes :
(1) An off-train option was available involving a bus transfer between Kidderminster and Bewdley where a round trip on the Severn Valley Railway was made with 46521 from Bewdley to Bridgnorth and 45110 back to Bewdley. Alan Osborn suspects it was a non-stop run out (special?) and a service train back - confirmation required.
(2) Originally uploaded as 33059 however a book containing very comprehensive tour notes seen by the Webmaster has the loco identified as 33058 thus confirmation is required as to the correct identity.
(3) Originally uploaded as having been booked via Weedon but running via Northampton, however a set of booked and actual times seen by the Webmaster gives an actual passing time at Weedon suggesting booked route was in fact taken. Confirmation required. 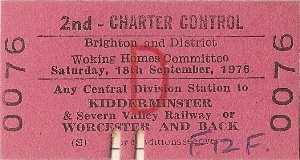