310076 took me South from Leighton Buzzard, through a snowy countryside but without delay. A walk to Marylebone then I joined my first DMU tour. The atmosphere was very library like amongst the enthusiast consist, not much bellowing or humour today I thought! We left at 0855 for an interesting tour of North London, we reversed in the bay platform at Wembley Central which was a massive scratch for the track men, as their excitement showed. The Chiltern chariot headboard on examination at a Kensington Olympia photo stop had been cleverly incorporated into the DMU's roller blind. Crossing the snowy Chilterns, rumours that snow may cause problems on the tour's main event, Dunstable, began. Our local knowledge that 25059 had ploughed the branch a few days earlier was doubted by many. We reversed at Luton to near the Vauxhall Sidings then purred along the smooth track bed of the 5 mile branch to a grey, gloomy Dunstable. Although heavy cement and oil trains used the line, some inspector decreed we must stop 1/3 mile short of the branch end because of a landslip or was it avalanche risk. So near Dog Kennel Bridge we all clambered out for half an hour to soak up the special atmosphere of the first passenger train for 20 odd years to Dunstable. We returned East, rejoining the main line at Luton. Here a few bashers leapt, enticed South by exotic 33/47/56 haulage of SR units out of Victoria because of the snow. I stayed on for an enjoyable run to Bedford where the river had frozen over, Bletchley Flyover and finally Aylesbury from where a beastly VR returned me home A good tour, perhaps DMU's weren't to be regarded as 'carts' after all. 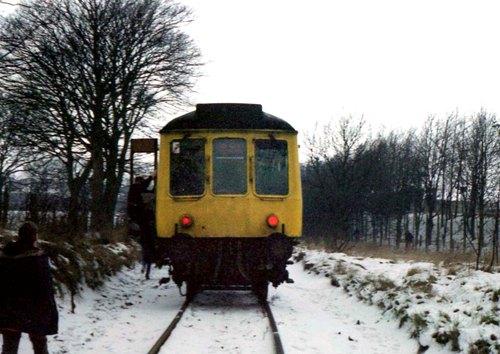 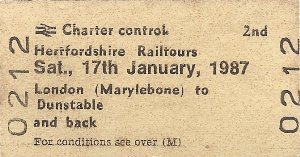 Mileage notes (from tour itinerary) : To reach the Great Northern line at Luton, the train will reverse from the down main platform into Vauxhall Sidings (i.e. towards Hatfield) for which the mileage to the stops is shown. At Dunstable the mileage is to the limit of the single running line, 28 chains short of the stops. Earth slippage beyond this point has caused the Civil Engineer not to allow a passenger train to travel to the end of the line. No reduction has been made in respect of the length of the train itself; for the purist, one chain equates quite closely to one carriage.