Notes:
(1) Reversed at pre-1966 station site (i.e. short of present station).
(2) Booked via the low-level line avoiding Northallerton station, but routed instead at short notice via the station (W.R. Lynch commnts: to the frustration of those who still wanted the elusive separately aligned southbound ramp up to Longlands Jn and had suffered the same disappointment on the Don & Tees tour on 22nd March 1986).
(3) Booked via Rotherham Central but actually went via Rotherham Masborough. 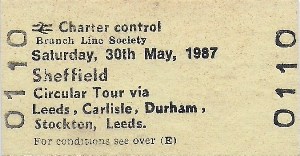