Notes:
(1) Gordon Jakes comments: On this date a timetable of special steam hauled special trains was run between Dorridge and Birmingham Moor Street to mark the closure of the terminal platforms at Birmingham Moor Street Station (and the reopening of the line to and a station at Birmingham Snow Hill. The locomotives used for the special trains were 7029 (ex-Tyseley) and 46443 (ex-Severn Valley). The coaching stock was a set of six Mk1 coaches painted in brown and cream. The locos were used on alternate trains and were rotated at the Moor Street end of the journey. Whilst the train ran to Dorridge the spare engine was coaled and watered at Tyseley as necessary. Platform 3 was used at Dorridge for the arrival and departure of the special train and the down goods loop was used by the loco to run round its train. I cannot remember the stopping pattern of the special trains but I am sure that it did not stop at every station - more likely stops were made at Solihull and perhaps Tyseley.
(2) Route & loco confirmation required. 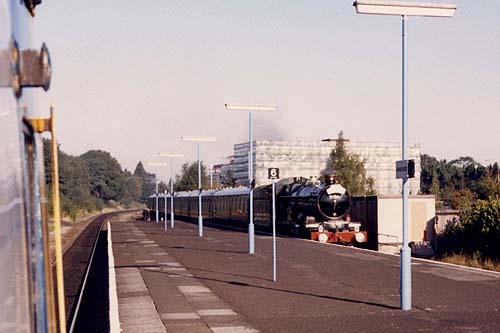 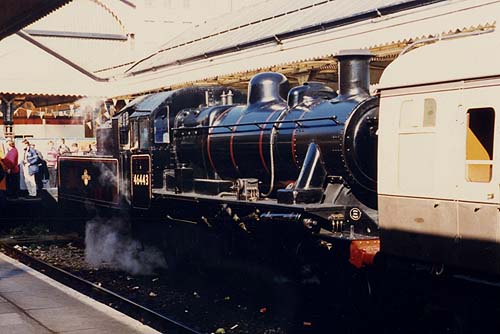 46443 at the buffers at Birmingham Moor Street. 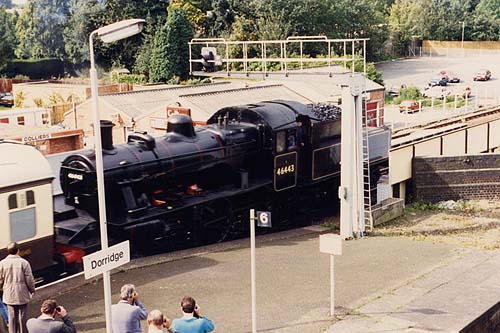