As one of the organisers/itinerary writer of this trip, my involvement started months before the tour actually ran. Track tours of this nature require very detailed planning and negotiation, and it does help when you have someone helping on the "inside". Well it so happens I was in Belgium speaking to a civil engineer about this tour we were due to run, about two weeks later I received some notes prepared by the said engineer updating the files! Several inspections of the track were also arranged however for some reason one of these that raised doubt over the New Bilton branch happened to get stuck in the bureaucratic machine. This may account why this was the only tour to traverse a number of these branches!

Back to the tour, with a Euston start I had to drive and park in the underground car park with four boxes of maps and itineraries to distribute on the train together with other administrative paperwork a rail/tube connection was not feasible. I can recall much to the journey to Oxford as I was passing through the train sorting out the usual stewarding duties and rubbish collection (a specialty, any tour organisers are welcome to contact Stew or me to dispose of any rubbish!). The tail loco was attached on arrival at Northampton prior to many reversals in the station area shunting via the down slow and No2 junction connection to reach the up platform.

This being the first passenger train over the lines since 1964, press and local TV were present along with many locals, where were you Gary? (not there - as a Northampton resident and a track basher I'm still rather ashamed to admit I still required the Brackmills and Briar Hill lines - eventually got the former, but never the latter! Gary). 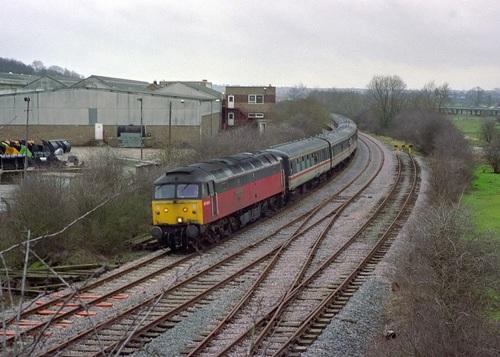 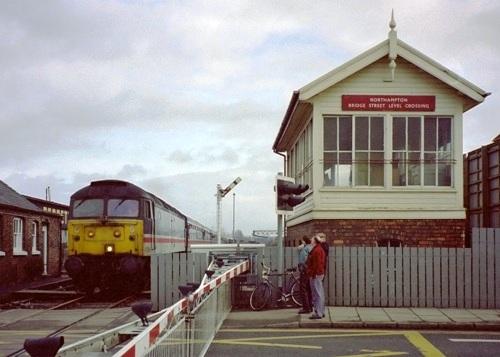 After much shunting around and reaching the practical limits on the lines we returned to Northampton. The route through to Rugby was particularly choice via the very rare goods flyover and the goods lines outside the station screen.

The signalling at New Bilton (required branch too! Gary) must have been unique as I believe it was last operational cross-bar signal, built from various bits of electrification posts. The line beyond to Southam and Leamington Spa had been lifted, so the stops were the best we could do. It was a conventional trip via the West Midlands as far a Kingswinford Junction, but the next bit of track was also choice, being the first tour since 1964 to approach the remains of the Shut End railway (guess what - also required track for me! Gary). The gates at the LCP Properties estate were firmly closed and there were no sign of the Class 02 shunters based there.

The transfer to the electric was done for operation convenience rather than at our request, but no time was lost. Much of the credit in running the tour goes to the negotiating skills of Ray Hardman who was the man behind many of the BLS tours of the time.

Source : Trevor Cockram (on train throughout)