A series of trips ran in conjunction with the Hereford Rail Festival. There may have been some others not recorded here (if you are aware of any others then please send in the details). Train times are given where known.

Steve Clark reports the 33's arrived and subsequently departed on a tour called "The Border Flyer" which originated from Basingstoke. Steve kemp comments : 33047 & 33053 came on at Newport and I think left early...a lot of bashers were still getting fodder! Further details of this tour are required... 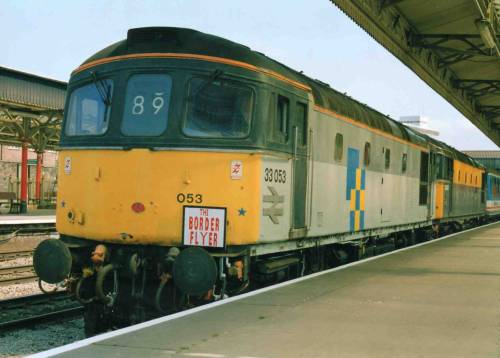 The final train of the day, 20007/032 on the 1746 Hereford to Derby.  We had intended to do this only as far as Droitwich, in fact my Mum was even in the car park waiting to pick us up!  The train slowed as we rolled into Droitwich, but to our surprise they opened up halfway along the platform and we blasted off towards Bromsgrove.  My mum's face was a picture, I still remember waving to her through the window!  OK then, we'll leap off at Bromsgrove...err, no, n/s through there too.  We were all getting worried here since it was (IIRC) New Street and Derby only, and being a Sunday night I don't think there were any trains back from Derby at that time.  To say we were not best pleased to be given the feather onto the Camp Hill line is an understatement, as to carry on to Derby, if we did go into New Street a reversal would need to take place, and 2 stops had already been missed...  To our great relief, the train did go into New Street, it did reverse (back out via Aston I think it went), and we just made the last train back to Kidderminster.  Remember this was all in the days before mobile phones, and we couldn't contact anyone to let them know where we were, let alone if we'd be getting home that night!  However did we manage?