Notes :
(1) Stock used when 47053 was hauling the train.
(2) Stock used when 47976 was hauling the train.
(3) Admission to the Coalville Open Day was also included in the tour fare. A broken Rail/Signalling faults west of Coalville, caused significant problems getting trains to/from the open day event and, as a result of the late running, the train did not stop at Coalville!
(4) Originally advertised outward route was: Liverpool Lime Street - St Helens Junction - Warrington Bank Quay - Northwich - Altrincham - Manchester Piccadilly. 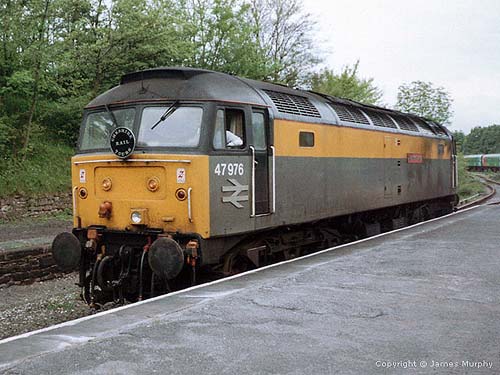 47976 runs round the train at Matlock (photo: Jim Murphy)

The Coalville Open Day of 1991 will be remembered for several reasons. For some it was significant for being "the last one" before the closure of this classic Midlands depot, but for others it stood for... several hours of torment, bad planning and some wailing! To this day the mere mention of the phrase "Matlock & Coalville Explorer" is enough to send some people into anaphylactic shock. And yet it all started innocently enough...

A tatty "banger blue" 47053 arrived at Piccadilly with a ragbag of stock seemingly cobbled together from the sweepings of Regional Railways' canteen floor. The route was different from a contemporary press advert of the time, with Warrington and Northwich not featuring in favour (I presume) of better timings. This minor point would become deliciously ironic later. Meanwhile a quick blast down (Up?) the Erewash was enjoyed behind this fairly "big" no-heater and we were soon lurching to a halt at Derby. That's where the fun began...

"Everybody off!" Er, right! For reasons since lost in the swirling Sulzer clag of time, we were all decanted onto a "fresh" set of carriages at Derby (the Pilkington rake, no less!!) for our booked "exploration" of the little-known moth-infested branch line to... er, Matlock? Well it must have seemed like a great idea at the time. Derby Research oddment 47976 "Aviemore Centre", rateable to my eyes because it had the word "Aviemore" in its name, took charge and we were soon hurtling through Duffield on the Slows at Warp Factor 0.00003.

Matlock, named after a medieval carpet security device (not many people know that), was duly arrived at and we were once again decanted onto the platform while our train ventured into the weeds to run-round. Slight problem! Train = load 12. Loop = definitely not. So we all stood around casually glancing at our watches while the Orange Vests split the stock and fiddled with point locks that were last greased using whale blubber in 1840 and watched 47976 do some fancy footwork to get to the opposite end. Someone casually asked "I wonder why they left 47053 at Derby?" shortly before being casually put to death. Nobody likes a smart arse.

Eventually the loco and stock were facing Derby again and we set off literally MINUTES late. We had delayed the "local" on this "one train in steam" branch and also missed our path across the treacherous Midland Main Line at Ambergate. Joy! Time went by...

Once back through Derby we headed down towards Burton, on the Slows all the way. As Leicester Junction drew nearer, something was clearly amiss; a long line of single yellows gave way to an inevitable single red. 47976 stared at it. The red light stared back. All was quiet...then the Gen Dispenser feed-backed into life. It wasn't good news. "A broken rail... too many trains... very late... blame BR..." Splendid! Everyone hunkered down for the long haul, and after a not inconsiderable length of time we made our way cautiously onto the Leicester Line. Dear reader, there followed a stagger the likes of which should only exist in a Train Planner's worst nightmares. A procession of red lights, block upon block, delay upon delay. Gresley Tunnel trundled by. Moira crawled past. "Shouldn't you be reading the news?" we said. How we laughed! Leaning out of a droplight to look
along the line I could see the rear of one train in front of ours and the headlights of two more behind. This was a single track one-way only line. The word "farce" didn't even begin to cover it.

And then came the icing on the cake. The Gen Dispenser crackled again; everyone held their breath. "Due to us being so late we've been told we cannot stop at Coalville..." The rest of the admittedly redundant message was drowned out by a good deal of heckling, jeering, wailing, gnashing and probably a few other verbal nouns that end with "ing". As the Open Day with its rows of traction and stalls and people slid past, there was a flurry of notebooks and cameras as people on the train tried to grab what record they could of this never-to-be-repeated event. A spotter on the ground looked around at our passing, smirked and covered up the number of one of the locos with a carrier bag. At least two people on the train shouted some friendly advice as to what else he could do with the bag. There was a further brief exchange between the tour staff and some officials, and
then it - Coalville - was gone from view.

Almost everyone on the train sat back down despondently and what little "atmosphere" there had been seemed to drift out of the ventilators, but more humiliation was to follow! We staggered back onto the mainline at Knighton, where 47976 was snapped off and disappeared to perform the necessary run-round, which could only have been more protracted if it had gone via Ramsgate. While we were sat engine-less, Hertfordshire's "Coalville Swansong" appeared on an adjacent line with a couple of Grids in top'n'tail mode, the punters seemingly having a much better time than we were. One lad was bellowing at us so enthusiastically that he nearly didn't see another train bearing down on him, retreating through his quarterlight so violently that he appeared to do himself an injury! But still we watched impassively as they headed back to Leicester before our
engine had even completed half a circuit.

Our errant Spoon eventually re-materialized on the north end and we strolled up to Leicester by now literally HOURS late. Sparkling new Tugs 60057+60032 were spotted on the Up Goods line, apparently preparing to take the Hertfordshire punters back where they came from, but we had to be content with 47976 for the rest of the trip. At some point a hastily-arranged petition was passed down the carriage, something about refunds, but I was too depressed to care so I simply gave up for the day and went to sleep. This was one tour best forgotten, although they say these experiences build character!!

Now about that wailing...