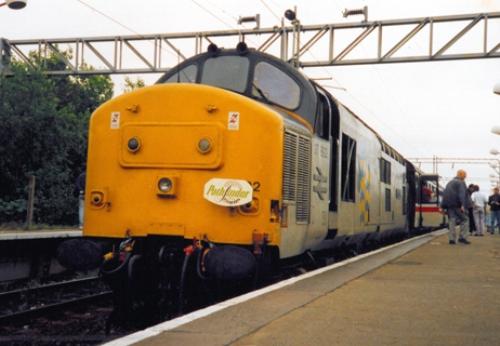 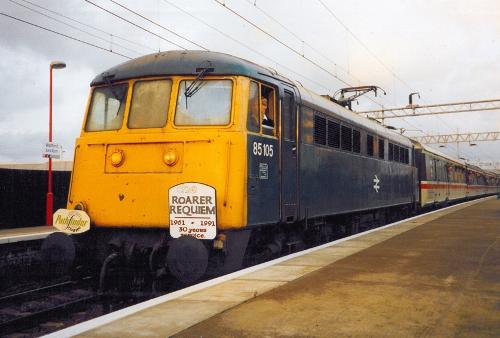 In what seems the far-off days when a Saturday night overnight service was provided on the WCML complete with the luxury of a seat, the Northbound "splitter" steadily loaded with enthusiasts heading for an early Sunday morning Manchester start.

85018 did the ECS in from Longsight and 85101 complete with her old number E3061 plus 006 in stencils on the cabside backed on as the farewell tour's power. For a class one magazine dubbed as "BR's most unloved class" there was a real sense of irony as the crowds gathered to photograph 85101 complete with headboard proudly proclaiming "30 years of service".

As we headed South, news of an Up Sleeper derailment between Coventry and Rugby filtered through. After an understandable long delay at New St we were routed "wrong line" past wrecked catenary and derailed Motorail vans which had originated from Carlisle. After this 85101 stormed South and after a drag across the North London lines behind 37888 we reached the rare class 85 haunt of Shoeburyness. 37892 returned us to Liverpool St with 85101 ""dead" on the back. With her reverser switch on she proceeded to roar all the way. A top and tail outing on t he GE followed with photo-stops at outrageous roarer locations followed. Liverpool St, Walton and Colchester St Botolph's being first and last "roarer" photting venues for most. 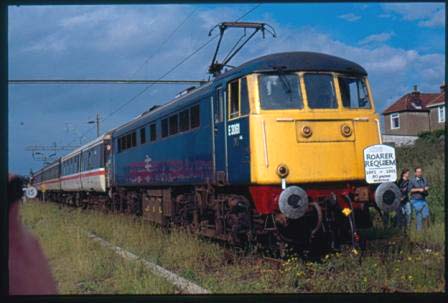 Once back at Brent Sdgs 85101 was detached, roaring past the tour along the equally doomed "engine line" before the rarer 85105 backed on for the final leg of the tour. With the evening sun providing a fitting sunset she put in a last bout of 100 mph running before the last ever arrival for the class on a passenger train at Birmingham New Street and Manhester Piccadilly.