Notes :
(1) Run as part of the Brighton Line 150th Anniversary, this was an attempt to break the previous non-stop record of 39mins 14secs (set on April 16th 1988 on a run from London Bridge, though Brian Halford suggests the fastest time to have been 38min 56sec?). Official time for this run was however 39mins 38secs due to a heavy brake application near Burgess Hill. Top speed reached was reported as 103mph and the average start-stop time of 76.6mph, considered to be the fastest ever trip from London Victoria. Train was sponsored by Lego UK. 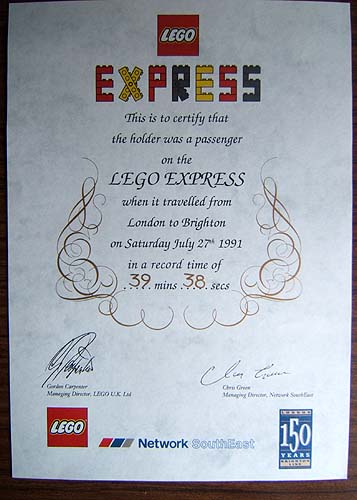 Timings (Booked Only)
(from Brian Halford)