Notes :
Run in connection with the Gloucester Rail Day. 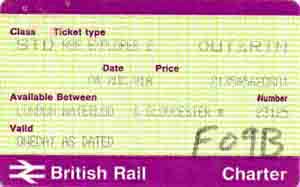 Nigel Jordan's ticket for the train.

Sources : Richard Rooker (joined/left the train at Wokingham)
& Nigel Jordan (joined at Waterloo, left at Reading on the return)

The slightly late start from Waterloo didn’t seem to matter as the time was recouped by Wokingham through a combination of easy timings and spirited running after Richmond. 8 minutes were lost due to a signal check before Reading, waiting for access to the GWML, and that put the train 6 late from the Berkshire town. The onward schedule was, in this writers opinion, completely over timed and so from a performance point of view the Cromptons didn’t have to work that hard. The only consolation for the long way around after Swindon was the scratching of some track, especially North Somerset Jn to Dr Days Jn.

The hour plus late start coming home was due to the late return to Gloucester of one of the rail shuttles that were run in conjunction with the Rail Day. Fortunately the return trip was routed via Kemble so a midnight arrival in London wouldn’t happen. Common sense prevailed after Swindon as the organisers announced that anyone could change at Reading in order to get a fast train to London, at no extra cost, rather than staying on to Waterloo. Reading was reached 51 down and this is where I left the train, for a tram to Paddington if memory serves me right.