Train cancelled on the day at Oxley (before working 5Z71 ECS to Codsall) due to problems with the coaching stock.

Notes :
The Compass Tours Website carried the following explanation:
The cancellation was made due to a door locking system and lighting fault on several carriages, the train was formed of 11 carriages formerly used by Virgin Trains. It was known that four carriages had failed batteries and other faults affecting power to the heating and lighting in recent weeks and it was arranged through our train suppliers that well trained fitters from Alstom based at Oxley depot (where the train we were using has been kept whilst not in use) in Wolverhampton would repair the faults. Oxley is five minutes away from 28/12/04's excursion starting station of Codsall. On inspection last Monday the repairs had still not been fully attended to and of course the matter was chased up by us and our train providers. Yesterday (Monday 27th) repairs had been attempted and a promise by Alstom was made that the train was repairable and WOULD be ready for the morning of our excursion for the comfort of our passengers, and because a train with such faults will not be allowed to leave a maintenance depot (ie: Oxley - where the train was this morning) in accordance to the nationally used Railway Rule Book.
By this morning (Tuesday 28th) another carriage's lights had failed - bringing the total number of failed vehicles to FIVE, which was totally unacceptable.
With the failure of the carriage lights also came the failure of the orange external lights next to the doors on the five carriages affected, these lights alert the train guard and station platform staff that doors are unlocked when lit, another major fault which meant the train was not allowed to leave the depot.
Our scheduled departure time from Oxley was 0639 to depart Codsall by 0646. At 0700 it was looking quite likely that the faults would be rectified but at 0800 came the news that the train would not be allowed to leave as there was nobody on the depot to carry out repairs.
The above is unacceptable and appalling that our passengers had to freeze on their local platforms until information could be passed around - and once again we apologize 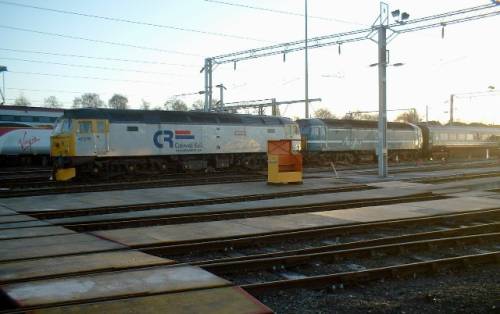 The tour that never was - shortly after cancellation the train is seen at Oxley.
(photo: Shaun Courtnage)

Back to "Tours That Did Not Run/Were Postponed"