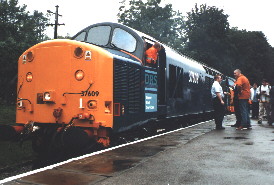 DRS 37609 on arrival at Oxenhope with a train from Keighley

Major attraction for this weekend was the "Keighley & Worth Valley Diesel Event 1998". In addition to the railways own diesel fleet, there were several visiting preserved engines. The whole event was sponsored by Direct Rail Services (DRS) who also loaned three of their freight locomotives, making this a "couldn't miss" event. The full list was;

For me this whole weekend had fallen neatly into place - I had a business visit to a customer in York on the Friday afternoon (coincidence, or good planning? - I leave you to judge) and a friend had invited me to stop at his house near Harrogate over the weekend. I duly arrived at David's early on Friday evening to be confronted with 1,000 "Deltic Deadline" journals that required to be put in envelopes and address labels adding (David is the editor of the Deltic Preservation Society journal). Well that little task took us about four hours and we finally finished at around half past midnight! Please spare a thought for David and all the many other editors out there who spend countless hours creating, collating and despatching preservation society newsletters and journals - a thankless task but very essential! Even better - why not offer to help out the editor of your favourite preservation society?

It was an early start for us and an hours drive (in horrible weather) in order to reach Oxenhope in time for the days first departure at 09.00 behind 37029. Anyone familiar with the K&WVR will know that the journey to Keighley is basically all down-hill so there was little effort required from the BR-blue tractor. At Keighley 029 was paired with the DRS tractor, 37609, for the return run to Oxenhope. On the rising gradient the sound of the pair must have been heard a long way off!

The day was spent zooming back and forth between Oxenhope and Keighley with various combinations of the locomotives on offer. Of note were the pairings of D8031 + steam loco 75078, the 20's, 25's, and D8031 + 37609. For those not wanting to travel the full length of the line, a shuttle train ran between Keighley and Ingrow which used either one of the rats or D226 "Vulcan", the prototype English Electric 0-6-0 shunter.

A break for lunch at Haworth was made although it appeared that nearly everyone else had the same idea and we joined a very large queue at the local fish & chip shop. By the time we had been served there was no time for a look around the loco shed as we had to dash back to catch the train. Everything seemed to be going to plan, except that news had emerged that 20311 was sick and might not haul a train. Luckily a lot of help was on hand and the sick chopper was coaxed into life towards the end of the day. For many, the highlight was the use of the three class 20's together on the 18.05 departure from Keighley as far as Haworth.

Unlike some diesel events, this one also featured evening "Beerex" trains. A band was even brought in to provide entertainment on board! Motive power was provided by the railways resident 08 shunter 13336, double-headed with visiting 08436. On the return leg from Keighley it was noticed that 13336 was "steaming well" - that and a strong smell of hot coolant suggesting that all might not be well. By this time it was after 9pm so we decided to call it a day, missing the second round trip with the gronks (although we parked at Haworth to see it arrive there). We believe the pair survived their second round trip.

So, how did I rate the Saturday of this event?

Sunday dawned a totally different day from Saturday - bright and dry. A later start was made and around 10.30 we set of for the Yorkshire Museum of Farming near York. Now you might be wondering why we had chosen to visit this museum - after all, it hardly sounds a likely location to go bashing diesels. Well, this museum just happens to have a short stretch of railway track and they operate trains at the weekends. On this Sunday it had been arranged to use ex-BR shunter 03079 on their train. This particular shunter had spent some years on the Isle of Wight and had just recently returned to the mainland and a life of preservation. The morning was spent travelling behind the 03 (plus an ex-industrial R-H shunter) and getting some photographs of the train in action. After a look around the rest of the museum and a drop of lunch in the cafe, it was time to do battle with the "weekend wallies" on the M1 motorway as I headed for home. 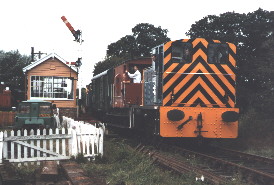 03079 approaches the station at the Yorkshire Museum of Farming

Verdict :
Both days were very enjoyable and well worth making the effort to attend. Thanks go to Pogo ("Pogo Promotions") for arranging the use of 03079 at the Yorkshire Museum of Farming on the Sunday.