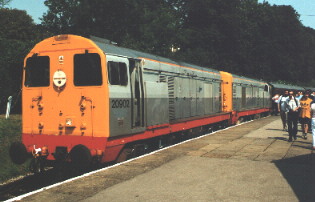 Being held the same weekend as Pathfinder Tours chose to run a railtour to Scotland meant this year I made my visit to the K&WVR on the Sunday rather than Saturday. DRS were again involved and loaned two of their Class 20/9's and two 37/6's. Other visiting traction included 08788, 26004, 27001 & 5580, so a very good line up to bring in the punters! The full line up on offer was;

Apparently on the Saturday evening train 08266 expired leaving the trains recovery to "D32" - an industrial diesel shunter and rare haulage for those lucky (?) enough to have been aboard.

Thanks to staying at a friends in Yorkshire over the weekend it was a reasonable time start to get over to Oxenhope in the morning. As the first departure was the K&WVR resident Class 25 (D5209) I chose to get there in time for the days second departure which was booked for 20902 and 20903, both of which I required for haulage. The pair duly produced and as expected the train was full with others who also required this pair for haulage. We took the train all the way to Keighley and then back to Damems where a swap onto 27001 was made (another required haulage for me).

27001 took us to Keighley and back to Damems where another bale got us onto 20902 and 20903 again (all helps with the mileage!) for another run back to Keighley. Here I hopped onto the Ingrow shuttle which had steam locomotive 80002 at the head (yes, you've guessed it - another required engine). The short journey to Ingrow and after a brief wait it was back aboard the 20/9's to Oxenhope. Here they were put away, their work for the day done. Our next journey was with 37612 (not required!) and this got us to Keighley just in the nick of time for 08788 which had taken over from the kettle on the shuttle to Ingrow. Most of our trains passengers dashed through the subway and piled on board to get this gronk "in the book".

The temperature was quite high by this time and the wait at Ingrow was spent in the relatively cool waiting room before 37612 returned (the heritage bus to Haworth being ignored). A bit of frantic action took place in the front coach as we reached Damems...and went through without stopping - much to the disappointment of many who wanted to bale for the pairing of 26004 and D5209. We all ended up at Oxenhope and, for me at least, the chance of the last required haulage of the day - 37604. It was paired with visiting Class 31 no. 5580 (never mind) but all we heard on leaving was the tractor which was doing all the work.

On departure from Haworth however it was left to the ped to do the work. I abandoned the train at Oakworth and it left with the tractor working - a case of turn-about on which loco was thrashed so it seems. A short wait and we picked up D5209 and 26004 for the run back to Oxenhope - probably the loudest pairing on the day. As I had had all the required haulages I was likely to get (and had only missed out on D8031 and D0226) I set off for home.

Verdict : another good event and well worth the effort to attend.