A review of the Saturday:

A sign of how fast 2002 is hurtling along....once again we have reached the first weekend in August and that means only one thing...the Keighley & Worth Valley Diesel Weekend. As with previous years, Direct Rail Services (DRS) were providing a number of locos for the gala. Visiting locos also came this year from the Midland Railway Centre and also there was to be one from EWS...thus providing a very varied choice of traction!

As is the norm these days, gen was flying about long before the gala. The "biggie" that a lot of people wanted from DRS was 20901 and this, along with 33025 & 37605, were muted as coming for the gala - indeed the weekends timetables showed them on the loco roster. A few days before and 56129 became the quoted EWS engine which pleased me as I required it.

The day before the weekend and reality unfortunately took over....

In the end the weekend line-up was as follows;

That still left me four winning engines to have for haulage so all in all not a bad gala for me.

I turned up at Oxenhope station with a colleague just on 10.30 and, day rover duly purchased, started off with a short run to Oakworth behind D8031 and 20303 - the DRS chopper being my first required haulage of the day.

A short wait at Oakworth and we picked-up 25059 heading the other way. At Haworth Loop 37190 was added to the front and this became my second winner of the day. The pair took us somewhat noisily to Oxenhope.

37190 now treated us to a return trip to Keighley on its own. Some of us abandoned the train at Haworth on the way back though - partly to go and get lunch in the local chippy and partly to avoid 47401 which was added at Haworth loop.

The class 47 avoidance move was further helped by 47401 itself - as we stood eating our sausage & chips on the station there was an announcement that the train to Keighley was delayed owing to the failure of 47401! Said train rolled in about 10 late with 50007 at the helm and this was taken to Oakworth to catch up with our other friinds who were on the other rake of stock. That was hauled by 20308 & 33025, the shredder being winner number 3 for me. 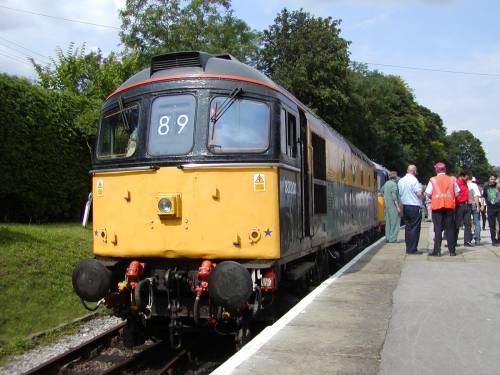 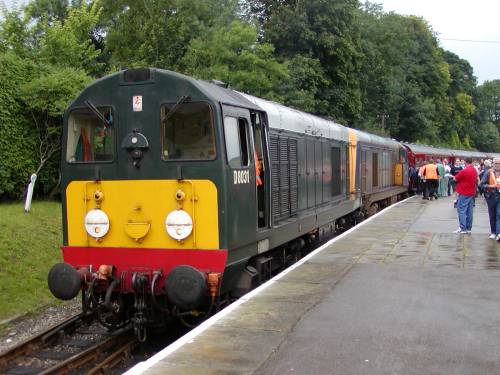 My last round trip was due to be behind 33025 on its own but 20308 was used instead. Load six on the way back up the hill was experienced from the front seating bay (where about 8-10 of us had been holed-up most of the day!). It was pretty good!!

At Haworth Loop we were due to have 56088 added to get it to Oxenhope ready for the evening "beerex" but it seems the crew on 20308 were not aware of this and we blasted out of Haworth intent on a non-stop run to Oxenhope. The brakes went on hard however, possibly as one of the ground staff was stood with both arms aloft when he realised we weren't showing any sign of stopping!

56088 was duly appended to the front of the train. What looked like some cross words between one of the DRS crew and various others took place....presumably about the communication chain that allowed the situation to occur. From Haworth Loop to Oxenhope only 56088 powered, 20308 simply ticked over...not sure if that was "booked", or was as a result of the lack of communication that had taken place? 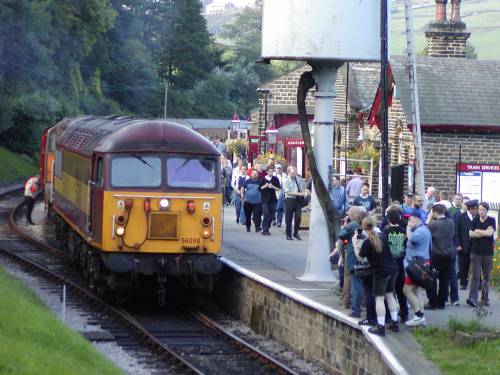 Myself and my colleague left at this point as we had a fair trek home (Tony having to get to the other side of Evesham and me to Northampton).

Verdict: Another good day out courtesy of the K&WVR, DRS & EWS. Shame about the change of advertised traction, but to be fair it didn't really spoil my enjoyment. Whilst we lost 20901 this time around, I'm sure it will eventually make it to a gala somewhere (next years K&WVR perhaps?). 37605 was a big loss for many, but in my case I had it between Birmingham and Coventry back on 5th September 1998 when it hauled the 19.06 Virgin service from Birmingham New Street to Paddington, thus I didn't mind.