Steve Pickersgill on the bash around the Peak District

Yet another Sunday and yet another diesel gala! Today was planned as an easy day out, with a friend, at the Churnet Valley Railway diesel gala (if leaving home at 06.45 for a two hour drive there can be called an easy day!), as several of the advertised locos and the track were required.

Having arrived nice and early for the first train, things immediately started to go downhill. 25322 was not working as repairs were not completed in time, and 31442 had not yet arrived at the railway!

D8154 was supposed to be working the 09.30 ex Cheddleton, but evidently due to problems it was piloted by 33102 - in the end the 20 was left just to tick over. Upon arrival at the southern terminus, Froghall, the 20 decided that it had had enough and promptly shut itself down. This left 33102 to run round and work the return journey on it's own. Much thrash was enjoyed on the uphill run from the loud beast on load 5 and a dead 20, all the way back to Cheddleton. A brief stop was enjoyed to detach the 20 from the rear, then it was off for a short sprint to Leek Brook Jn for the crompton to run round. Back at Cheddleton, the crompton remained on the front for the next round trip, although rumours were that the 20 would be fixed for a subsequent trip, it being low on oil.

So another round trip was enjoyed with the crompton thrashing away on the front, this time with a non stop run through Cheddleton on the return. 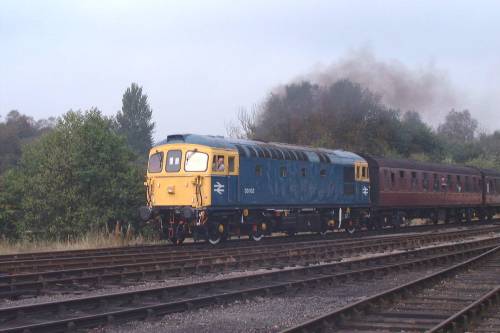 For the third trip over the line, the crompton was removed from the front of the train and replaced with the 20, only for D8154 to promptly shut itself down again. The 20 having been dumped back on the shed 33102 duly re-appeared to thrash away again!

At this point I decided to bale from the train and sample the 04 (D2334) that was giving brake van rides in the yard. That having being accomplished and with the gen received revealing that the 20 was not going to play any further part in the day's events thoughts turned to heading back home, upon which suggestion my friend stated that it may be possible to dash over the other side of the Peak District for the last few trains of the Midland Railway Centre diesel gala. A quick look at the map revealed that this was possible, so a fast car move was done via Peak Forest stabling point (66080; 60057 and 60097 duly photted) to arrive at Butterley just in time to witness the departure of 45133! For this thanks must not be directed at the tourists and Sunday drivers dawdling around Bakewell and Matlock!

Having been able to study the diagrams in the 10 seconds flat that it took my colleague to purchase his day rover ticket (a whopping GBP9.95 - ouch!) and before he could compose himself from the shock, I declared that a fast walk down the footpath for Swanwick Jn was required to cane in the peak on it's return journey, this move enabling us to also be in position for required 33201 at Hammersmith. A photo of 31271 arriving at Butterley was taken on the way to Swanwick, where we arrived with around fifteen minutes to look around and photograph the locos on the shed.

45133 was duly caned in with a saunter (a stagger is an exaggeration on this line) to Hammersmith where 33201 appeared to work the train back to Riddings Jn. Another saunter down to the other end of the line allowed 33201 to run round and at long last provide some noisy entertainment for the couple of miles back to Swanwick Jn. I was pleased to have scored this engine at least, having not been able to make it on previous occasions that it has worked at other railways. 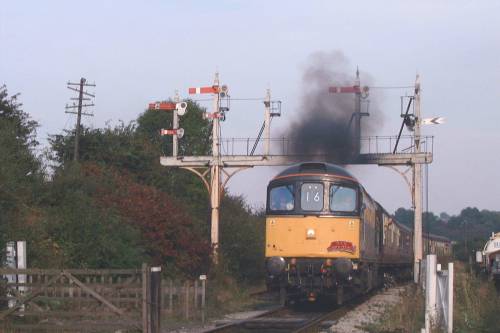 We baled at Swanwick as the 03 was dragging the DMU on the following service, however, upon arrival it promptly failed - I knew I should have followed the rules of Shunter bashing!!!! The 03 was duly removed from the train leaving the DMU to work to Hammersmith and return to Butterley under it's own power - pleasing my friend in the process as he's a fan of first generation DMUs! This being the final train of the day, it was time for the long drive back home having achieved a desperation index of nearly 100 (having driven some 400 miles for 4 miles of required haulage)!!!

Normally, I would not have driven so far for a short leap behind one required engine (the shunter doesn't count!) and had we known about the circumstances on the Churnet Valley Railway in advance we probably wouldn't have bothered. Whilst we were impressed with potential on the CVR, no apology was evident for the lack of 25 and 31 as advertised - indeed subsequent investigation has discovered that they were never likely to work in the first place. Despite this we are likely to return for their next diesel gala. We were also shocked at the ching on the Midland Railway Centre - it costs nearly as much as the Severn Valley Railway which has five times the mileage on offer! Under normal circumstances I wouldn't visit the Midland Railway Centre if you paid me, I have never been a fan of the line and there is not much thrash on offer - a major disappointment for the price they charge.