Having had a couple of weeks away from stewarding with Pathfinder, Mrs C had agreed to a passout to go and play preserved trains over this weekend. However, the big problem was where to go.... posessing what must be one of the emptier books in the EPBM competition (See Gary's personal pages for details), there were a number of options that would net a good haul of winners. After much debating, looking at timetables and receipt of gen, the decision was made to go as a family to the Great Central Railway on Saturday for their 1960's Steam and Diesel Gala, and then Ollie (my elder son) and I would go and do the Chinnor and Princes Risborough Diesel Gala on the Sunday.

Saturday dawned, and as per usual the boys were up early, so we were out of the door just after 0830. The plan was to try and get to Loughborough for the 1030 departure, as it was GWR Prarie 4141s only passenger working until much later in the day. If this failed, the fallback was the 1055....Everything was on schedule.. we left the M1 for the run into Loughborough at about 1000, and after a mile or two, picked up the brown signs for the GCR. However, having turned south down the A6 for a bit, the penny dropped... the signs were taking us off to Quorn (which was no use, as the planned last move did not stop there), so a quick turn was made back towards the town centre. Unfortunately, things started to get a little more complicated, as there were now no signposts, and the only map that I had was a National Road Atlas, so we ended up turning back and forth around the backstreets to the south of the town centre. Eventually, some diesel plumes were spotted, and after a couple more changes of direction, we made it to the station and parked up.... at about 1025. Lisa suggested I went off for the train, and that she would follow on the 1055 train, but in the event, a late start had us all aboard for the departure. 4141 was duly caned in on a 'Local' service to Rothley, a compo proving quite useful at keeping the now rather excited boys contained! (Every time the whistle blew, an 'echo' ensued! At Rothley, we were all required to detrain, as the stock was to be run into the yard pending it's later return with the ED. I was interested to see that, despite the fact that it was delaying a return service, this was not done with any haste, and took about 10 minutes to achieve... somewhat slower than the 2 minutes that were booked!). Our return to Loughborough was made with WD 90775, at which point we had a break before the next move, thus a table was taken in the nicely restored buffet, and a coffee procured.

At about 1155, the ED rolled in with the local stock, and we climbed on board ready for the trip back to Rothley (The service was announced as terminating at Rothley due to engineering works!). A slightly quicker run-round had us leave only slightly adrift from booked time, this time the journey being punctuated by Da-Daas rather than Woo-woos, (Is that the right spelling for diesel horns / steam whistles???) and also 'Water....Water!' as we crossed the Swithland Reservoir for the third time! A faster shunt had the ED and stock off the mainline, and the road pulled off fairly quickly, but to no avail... the service (this time hauled by O2 63601) arrived about 10 minutes late. We boarded quickly, but there was another delay (possibly to do with the engine??) before we set off. By this stage, our move at Loughborough was looking a bit tight..... the +24 now looking about +3, which is not fun with two young children and a pushchair. However, as we rolled into Loughborough, I was rather pleased to see the 20 and 31 sitting outside the station ready to drop on our stock.... and being right at the back, it meant we would be in prime position for some thrash to Leicester North!

Some quick shunting saw us make our first on-time departure of the day for the 1300 non-stop run to Leicester. Initially, the 20 (leading, and running nose first) was doing all the work, but once we cleared the station, the 31 fired into life in the expected cloud of white smoke. I have to say that I was quite impressed with the thrash from both locos given the speed limits, and soon we were running through Quorn, and back over the reservoir. The fast run came to an abrupt end on the approach to Rothley though - we were held outside the station waiting for the late running service from Leicester to clear the single track. After a few minutes, we started off, just as 90775 passed us, and continued through to the end of the line. There was time for a couple of quick photos during the run-round before the return to Loughborough to complete the days cranking. Just time for a burger and a couple of phots of 37255 before the trip back south! 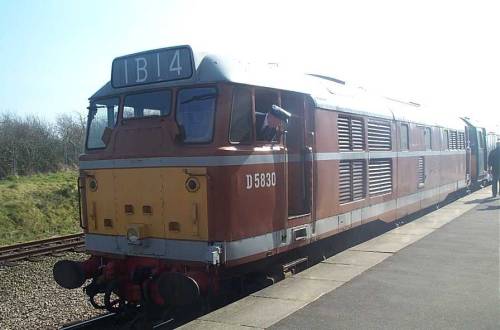 One of Steve's photos shows D5830 running round.

Sundays trip was somewhat simpler - a depature time of 0930 was a little better, and this time just with Ollie in tow (who was rather pleased to be promoted to the front seat of the car!). A fast run to Chinnor resulted in us arriving at an almost full car park just in time to see the Bubble Car arrive back from it's first run of the day. Due to the CPRRA being awarded the Ian Allen Publishing Award for the reconstruction of Chinnor Station (and well deserved from what I could see!!), there was a break in the train services whilst a Plaque was unveiled by Sir William McAlpine.

Ceremonies over, 31163 / D5581 rolled into the station, ready to work it's first train in preservation. A compo in the front coach was obtained, and we were soon departing. Again, there was plenty of white clag from the Goyle, as it slowly rolled out of the station. The run was fairly slow for the first mile or so, but once out into the open countryside, the driver opened up for a bit of decent thrash!! We soon came to a halt at a hand operated crossing (Horsenden Lane it says here on their website!), and after this rolled up to the runround loop at Thame Junction. Judging by the rust on the track, this was the first use of the loop for a little while, and therefore the manoeuvre was taken fairly gently. Nonetheless, we were soon on our way, and having stopped to pick up the gate-man, we trundled back to Chinnor Station whence we were required to detrain whilst the stock shunted for the loco change. At this point, Ollie decided that he wanted to go home, accompanied by a bit of a scream (not lost on Sir William McAlpine, who was standing alongside... there goes the chance of cheap building projects methinks!!). As the train rolled in, we again made for the lead BSK, but this time went into the Van area. The cage had been removed, yiedling a bric-a-brac stall (!), some bench seats and a large Signal-box display of the Neasden area that was powered up such that the lights were going on and off (fairly) appropriately.... you never know, perhaps they've got a wireless link into the Chiltern lines!!! {;-) This was more than enough to keep Ollie amused whilst Daddy scored in his first (and last) class 17... quite a nice little engine!

By the time we returned to Chinnor for the second time, I realised I'd need to come up with something better to keep Ollie happy for my last run (with Gronk 13018).... Juice, crisps and a Kit Kat from the grounded Cambrian coach proved suitable bribery, so for the last run, we went for the TSO to take advantage of a table. Now, to this point, the service had been slowly dropping time... we left Chinnor about 10-15 minutes late, but clearly the Gronk driver was on a mission, and he stormed down the line to the Gate stop at what seemed to be a faster rate than the previous two runs. The run-round at Thame Junction also seemed to be a little quicker, and unlike previous runs, we did not pick up the gate-man on the return trip (hope he was expecting to get 'tail-lighted'!!). The result was the fastest return trip of the day.... so, yes, there's proof to one and all - a Gronk is faster than a Ped!!!!!!!

And thus, nine out of nine engines scratched for the weekend.... Certainly a change from working on Pathfinder Tours, and far more more relaxed operationally than working on the national network (yes, yes, I know you all hate me for chivvying you back on to the trains after those photostops, but time is money... or additional charges... so they tell us!). Back to normal next week though, so see you on the Tyne Line!!