Stuart Chapman on a day out in Northants... 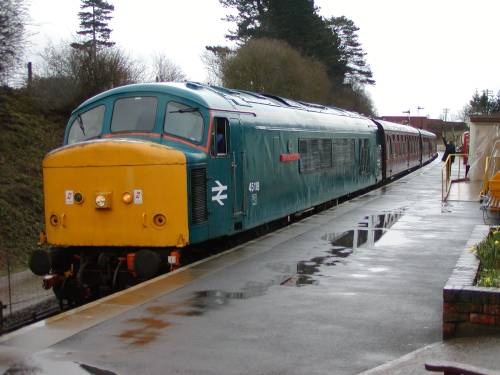 The day started early with a run to Peterborough. With just a few weeks left of the class 56's in service and a quick check of the Class 56 Group website to confirm the location a detour was made for a couple of photo's. Only 56018 and 60038 were in evidence, but as it was only the 56 I was after the journey was worth it. Another quick stop at Ferry Meadows (would I ever get to the NLR) proved fruitless as the steam service was running about half an hour late. Just as I left Peterborough the rain started and got worse and worse.

Arrival at Pitsford & Brampton was about an hour later and with the car parked 45118 stormed past. With the heavens still open I decided to go for the haulage first and photo's second

I arrived at the booking office and was offered the choice of a single ticket (3 return runs over the line) or an all day pass, being optimistic about the weather I opted for the former. I then asked whether there was a guide book. I was told there wasn't so instead opted for the 'Premier Line' society magazine. As I passed my money across the woman serving said there was a later issue, to which a very rude voice in the background seemed to shout ' he can't have that it's for members only'. Now frankly I'm not bothered what issue I get and can fully understand that members should get their copies first. I just don't think it's a very good advertisement for the line if the first impression of a railway given is people arguing and shouting. (NB: everyone else on the day was extremely warm and friendly).

Now onto the loco - 45118 looked resplendent. The first carriage had been booked by a charter, but the second carriage still got plenty of noise from the front. While only a short line there is still a reasonable amount to see. We soon passed 31289 and 27056 just north of the station, and there is a major bridge over the river. The 45 was working in push/pull mode so there were no long waits for run rounds. At the south end of the line there is a signal box with sidings. All in all the 3 runs gave plenty of time to sample the peak in all it's glory.

Soon after exiting the train the sun came out briefly, which finally gave a chance for some photo's, but all too soon I had to head for home.