Saturday 12th September 19??
The Tale of a failed Western

This offering describes actual events that took place on....well, I'll let you decide when and where all this took place...

During the day a rumour had circulated that there would be an evening additional train, scheduled to be formed of 14 mark 1 coaches and hauled by a Warship, with a Class 24 providing assistance at the back of the train. Not a train to be missed! My positioning move would get me to the station with 22 minutes to spare and there was the added the advantage that that train was booked to be headed by a Class 52 "Western".

Sure enough, D1041 "Western Prince" stood gleaming at the head of 7 mark 1's and sounding the part, although only running on one engine. Passage was swift until we neared our destination. We slowed on the approach to the station to allow the secondman to hand over the single line token to the signalman. As the driver applied power to draw the train forward to the platform the engine note changed and the revs fell away. The driver immediately shut off power and we rolled to a halt with the Western and the leading door of the front coach just on the platform. Another attempt to apply power also caused the revs to falter and, on the third attempt, the engine cut out altogether. Silence descended.

After a few minutes it was established that "Western Prince" was going no further under her own power - the fuel gauge was showing zero and no diesel locomotive goes too well without a supply of diesel! With one door on the platform the passengers (only about two dozen) were able to alight and watch the proceedings. It transpired that the 20.00 additional train was to be formed using "our" coaches plus seven from an earlier terminated train. The pressure was on to rescue the Western and get the stock for the additional train formed up.

The first movement happened quite quickly - a Class 33 was rapidly fired up at the adjoining depot and despatched to collect the failed 52 and draw the stock forward to clear the station points which were still obstructed, preventing the Warship from being attached to the end of the train. With the Crompton attached to the Western, the train was drawn forward, then "Western Prince" was uncoupled from the train and taken on shed to be prepared for the next days duties - the loco being booked for the 11.00 Sunday morning departure. Next out of the darkness came a rake of coaches being guided by a man with a Bardic lamp - the loco (happened to be D5054) was at the far end and was propelling the stock. With the two seven coach rakes successfully joined, the rostered Warship, 832 "Onslaught" was attached and, just 15 minutes or so late, the 20.00 departed on its short journey.

From my vantage point in the leading coach the Warship seemed to make light of the 500+ tons trailing load, though no doubt the Class 24 was doing its best to help from the back. With some spirited running, and helped by the non-stop schedule, arrival at our destination was only a few minutes down against the booked arrival time.

So, somewhere in the West Country circa 1973 ?? Well, actually the station was Bury Bolton Street on the East Lancashire Railway and the year 1998! This problem with "Western Prince" was all that marred an otherwise faultless days running on the first day of the ELR's September diesel gala. Day one was called the "ELR Mini-Mix" day with basically all the available diesels turned out and day 2 was to be "Western Region Day", the onus being on WR traction (of course!). 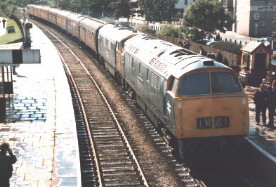 A powerful doubleheader - D1041 and 832 on arrival at Ramsbottom.

The DMU was also booked for some of the Bury to Ramsbottom shuttle turns on the Sunday only.

I won't bore you with a blow-by-blow account of the days journeys, but worth a mention are;

832 and D7076 double-headed on the 14.00 ex-Bury as far as Ramsbottom - the highlight of the day for me. Both locomotives also performed solo and were a worthwhile "bash".

It was quite cold and very wet most of the time. Perhaps the most noticeable thing though were the lack of people travelling - on a number of journeys there were less than a dozen passengers in the leading coach! I left the 14-coach evening special at Rawtenstall, so did not experience the return journey to Bury with the "splutterbug" leading - if anyone was aboard, why not drop me a line and let me know what it was like?

Verdict : Probably one of the better days this year for diesels on a preserved line, just a shame the weather couldn't have been a bit better (i.e. drier). A shame too that the Saturday was not better supported - a surprise really considering the number of locomotives on offer.

Compliments too to the operating staff who were involved in the "rescue" of D1041 - I've no doubt that many other preserved railways would have taken a long time to recover from such an incident and might even have cancelled the last train rather than see the job through. Bear in mind too that most of the off-duty staff were also present and cracking a lot of jokes about the abilities of the crews involved and offering some amusing solutions to the situation! 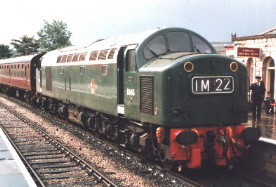 Class 40 D345 at Ramsbottom on a Rawtenstall service.