As the year draws towards it's conclusion (nights getting darker, only "xx" shopping days to Christmas etc), the time comes around again for the Severn Valley's dieselfest which is normally at the start of October and coincides with the Vintage Vehicle Day on the Sunday of the weekend in question. This year however the diesel gala was moved back a week, but at least this meant it was back to a "true" three day event (being held on Friday to Sunday) though at least two steam locomotives would be in use at the weekend. In recent years the gala has consisted of (primarily) the lines home diesel traction fleet but this year there were visiting locomotives from the East Lancashire Railway and Freightliner had also agreed to loan one of it's Class 57's. 50149 from the West Somerset Railway was also on the line and available for use.

The full line up of diesels on offer was;

I required the 50 for haulage and, prior to the event, the rumour factory was suggesting 57004 would be the "super-spoon" attending the event - also required. As this is my "home railway" (I'm a working member on the SVR) my attendance on at least one day was not in question. A call to a friend who had a copy of the internal railway working timetable for the weekend (the advantage of me being a working member, decent advance gen) confirmed the diagrams and allowed some element of pre-planning to ensure nothing rateable was missed. For me my priorities for the day were;

With D345 out on the days first departure from Kidderminster at 09.00 it was (another) early start for me, made all the more difficult by a tiring week at work - 700 miles driving, a 6am start on the Friday and midnight finish following an evening of "head-banging" to Def Leppard in concert at the Birmingham NEC Arena. Great gig by the way!

The cars autopilot got me to Kidderminster for about 8.30 just in time to see D5054, D832 and D345 being started up. Quite a sound having all three running alongside each other! The Warship (D832) was booked to pilot D345 as far as Bewdley. Just time to meet and greet a couple of friends before departure time - amazingly just a few minutes to 9am and one of the front door windows behind D345 was still unclaimed. Not for long as I took up position at it. On departure from Kiddy the Warship did most of the work as we passed the signal box, then spotted the big green Freightliner liveried super-spoon sitting on the transfer road between Railtrack and SVR metals. 002! Damn, no "scratch" for me today there then as I'd had No.2 back in February on a railtour. Once we were round the corner towards Bewdley both locos were opened up and acceleration to line speed was somewhat rapid, the combined 4,200bhp making light work of the 7 or 8 coaches in tow. 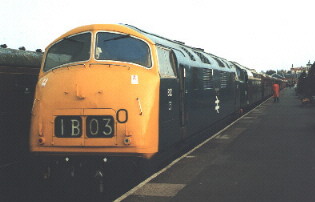 At Bewdley D832 "Onslaught" was uncoupled and ran up into the Tenbury spur out of our way. With the coaches clear of the Bewdley North pointwork and being on a rising gradient, some decent thrash from D345 soon commenced. The whole way to Bridgnorth I stayed at my front window, thoroughly enjoying the quite unique sound of the "whistling wonder" up front - reminding me of many journeys in Scotland in the late 1970's when a lot of the Inter-City expresses were hauled by these magnificent machines. At Hampton Loade there was a lot of cross-train traffic when we passed D1013 "Western Ranger" on the days first "up" working. Me, I wanted to enjoy the thrash up Eardington bank from my vantage point right behind D345!

A quick leap at Bridgnorth (5 minutes arrival to departure) got us behind "rat" D7633 heading south. The departure from Bridgnorth was somewhat slow as load 8 and the gradient proved a bit of a test for the little loco. Once over the summit myself and the friend who was with me headed to the back of the train for a fast leap at Hampton Loade - onto "splutterbug" D5054 - to see how it coped with the climb to Eardington summit. The answer? Very well indeed! It chattered loudly all the way to the summit, apparently dealing with the load behind it with ease. Pleasing to see too that it was providing train heat from its active steam boiler! 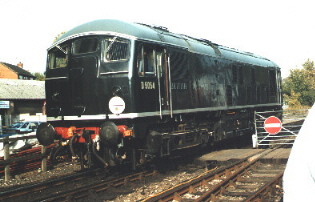 A 45 minute layover this time (it was a kettle heading south departing immediately after we arrived) enabled a quick look round the bookshop and a bite to eat before wandering onto the 11.50 departure with D345 again. A window in the front coach was again secured (about half way back) though the performance southbound was somewhat lacking compared to the northbound run. We went as far as Arley where we were booked to cross with a train headed by 50149. A swift walk over the road bridge had us on the train behind "Defiance" and another preserved loco was then scored for haulage.

Yet another quick turn-around at Bridgnorth got us behind D821 "Greyhound" for a run through to Kidderminster (to position us for the first run of the day behind the super-spoon). At Arley we saw a couple of friends - Alan and Speedy - and they joined us for the run south. At Bewdley the other Warship, D832, was attached as pilot engine and for the run to Kidderminster we could enjoy haulage behind the entire surviving Warship fleet - sad really when you consider the original fleet size when built was 71.

Back at Kidder and we baled off the train (even though it was the same coaches for our departure behind 57002) to watch the antics getting the loco on the train. With being air brake only and our coaches vacuum brake only, a loco was required to be coupled in between 57002 and the coaches. The honour of being the super-spoons baby-sitter fell to rat D7633 which was quickly attached. 57002 was however "trapped" the wrong side of D345 so that had to be moved out of the way first. With the shunting complete we were off with our bit of modern technology up-front. The 2,500bhp GM 645-12E3 power unit was easily audible over the burble from the 25 (which only ticked over, it did not provide any train power at any stage of the journey) - again another unique sound, and I might suggest, very "un-British" compared to our own home-grown traction!

At Bewdley many baled for 50149 back to Kidder, but were out of luck as we were slightly late and quick work by the Bewdley South signalman and station staff had the hoover away only seconds after our train drew to a halt. Never mind, they could enjoy (!?!) a return journey to Kidder in the DMU which was working a shuttle service between Arley and Kidder. We did the super-spoon through to Hampton Loade for the quick change onto D1013. This was taken as far as Arley for D832 heading north again, this time to Bridgnorth. Another 5 minute change for the rat and super-spoon back to Arley (all helps with the mileages!) for a last spin northwards on a train headed by D345 with D1013 at the rear. Sitting at the back of the train however it was obvious that the Western was just acting as an additional 111 tonnes of deadweight, as it did not provide traction. 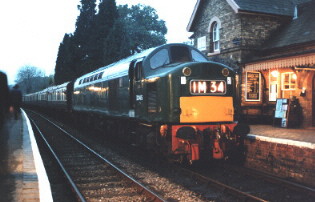 D345 at Hampton Loade in the rapidly failing daylight.

Last change was at Hampton Loade to get D5054 back to Kidderminster. In the rapidly failing light it was an enjoyable journey south - the distinctive Sulzer chatter from the splutterbug taking me back to my travels around Scotland many years ago when many services there were hauled by the 24's more powerful, but similar sounding, cousins, the 26's and 27's.

The mileage total for the day was a quite respectable 106 miles, especially considering the number of train changes made. Only one loco was not sampled - the class 27, D5410. It was standby loco at Bridgnorth all day, only venturing out on a booked working in the mid-evening. I'd have stopped for it but decided I wanted an early night to catch up on some much needed zzzzz's!

Verdict : Glad I went. Good selection of traction on offer, good timekeeping (except for a delayed kettle working in the late afternoon which put about 20 minutes into the timetable) and quite reasonably filled trains all day too.