Saturday 19th December 1998
Another "Super-Spoon" falls to the bashers 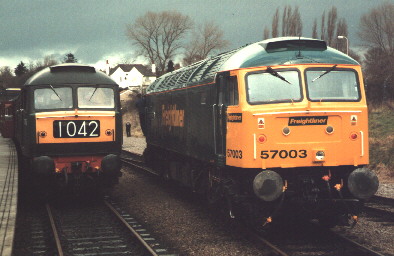 The last Saturday before Christmas and, from a railway perspective, there was not so much on. During the previous week however it was announced that 57003, the latest of the class to be released from Brush Traction, would be on the Great Central Railway for testing. An arrangement was reached between the GCR, Brush and Freightliner to allow its use on a couple of passenger trains on the Saturday. This would only be the second time a Class 57 had hauled a train of passengers.

Then, on the Thursday evening I had a call from a friend to say that one of the railway magazines was carrying a report that Silverlink County were planning to operate two extra trains from Bletchley using one (or two) Fragonset Railways Class 31's. A visit to the enquiry office at Northampton did not produce any confirmation and attempts to get through to Silverlinks customer service department failed completely. With no other gen about it appears to have been another load of rubbish published by the said periodical trying to be the "first for news"....and failing (yet again)!

Anyway, back to the use of "Super-spoon" 57003 on the GCR. Clear messages on the uk.railway newsgroup and Rail-gen both confirmed that it would work trains at 12.30 and 14.45 with the resident GCR Class 47 "in tow" acting as a brake translator. A nice late start and I was still at Loughborough with plenty of time to wander down to the shed for a look around. Whilst I was down there the 47+57 combo were shunted into the siding alongside platform 2 in readiness for the first working. A number of familiar faces appeared so it was not long before there were enough of us to fill a compartment.

As soon as the 11.45 Santa Special left platform 1 our train pulled out towards Leicester so it could set-back into the now empty platform. The steam generator car was still attached top the back and this small steaming 4-wheeler made a strange sight. As the stock was propelled back into platform 1 it made an even more bizarre sight leading the train! The first coach was a brake first so we piled into the second coach (a compo) and claimed a compartment. The guard soon appeared and said he was not bothered about keeping the 1st class compartments for anyone with appropriate tickets, so we quickly moved forward into the leading coach (as did everyone else, until it was full).

Departure was on-time and it was just about possible to hear the 57 over the sound of the 47 (D1705) ticking over. We stopped at Quorn and Rothley (where we passed the kettle going the other way) and terminated at Leicester North. There was plenty of time to photograph, video and peer at the locos before they ran round to the other end of the train. As with the outward journey, the Class 57 led the pairing. We departed for Loughborough at 13.25 and, as we climbed the gradient towards Rothley, a deep grumble and emission of black smoke gave the game away - D1705 was providing power too. This pleased me as I needed the 47 for haulage. Between Rothley and Quorn the spoon again did its bit to help us along.

Once back at Loughborough there was about 45 minutes to run the pair of locos around before the second departure. I didn't wait for this though and headed for home.

Thanks go to the GCR, Brush Traction and Freightliner for the planning and arrangements for this little event. It certainly seemed to be a success judging by the numbers that turned out for the first working.