Over the years, for various reasons, there have been occasions when service trains have been seen with headboards. This Page is an attempt to record those instances with, where known, the reason the headboard was carried. 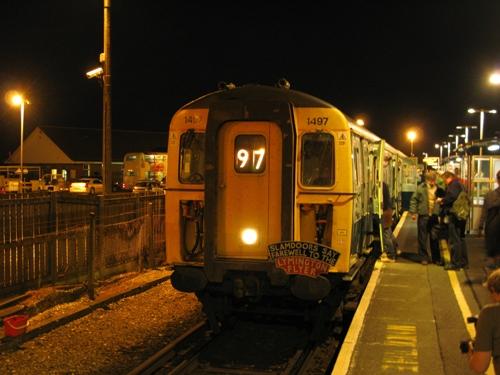 John Clifford comments that 159013 on the 12.34 Paignton to London Waterloo carried a headboard "Paignton Farewell" to mark this being the last South West Trains working between Paignton and London.

Train ran from St Leonards depot (09.50d, formed as 60116+60118 only with 60118 leading away from St Leonards) on a four hour journey, over the Romney March line twice and made a circular tour from Ashford via Kolkestone, Dover, Deal (traversing two sides of the triangle to turn the stock formation, reversing at  Minster East Jn), Canterbury and back to Ashford.

John Clifford reports seeing a photo of 313117 on the 23.37 North Woolwich to Stratford (being the last service train from North Woolwich) carrying the headboard;

John Clifford noted the the 13.00 London Victoria to Gatwick & 13.50 Gatwick to London Victoria carried headboards at each end to mark the last use of 73's on the Gatwick Express. The boards were the same as were used on when the service was introduced in 1984 & read:

From Victoria the locos & stock were: 73208+8206+8311+8202+9110+73202. The usual route was not followed either way. On the down journey the train ran via Redhill instead of the Quarry line while on the way back it ran via Stewarts Lane to arrive at platform 8 on the Chatham side of London Victoria.

John Clifford noted the 15.16 Colchester to Basingstoke and 18.32 Basingstoke to Ipswich services (formed of unit 170206) carrying a "Farewell Anglia X Link" headboard to mark the end of the Anglia Cross Link train service.

John Simmonds comments that the 09.00 Bristol Temple Meads to Weymouth and 16.30 return, hauled by 37116, carried a circular "Sand and Cycle headoard.

John Melia comments that the 19:08 Blackpool North-Liverpool Lime Street and 21:52 return Liverpool-Blackpool on 27/05/94 carried a headboard  Stating "FYLDE-MERSEY 37 FAREWELL". That marked the end of 37 use on the Blackpool-Liverpool trains (they continued on turns out of Manchester for a while longer). 37402 was the train engine and the stock included a Blue Grey Mk2 BSO which must of been one of the last times a Blue Grey coach was used on a service train on BR.

Grahame Arnold comments that a headboard reading 'THE LAST TRAD JAZZ' (previously carried on the Badger Railtours tour of the same name on 23rd January 2003) was carried by unit 305420 to mark the end of Class 305 working on the Liverpool Street suburban lines. The working ended at Barking, passengers being permitted on the normally empty-stock last part of the diagram. 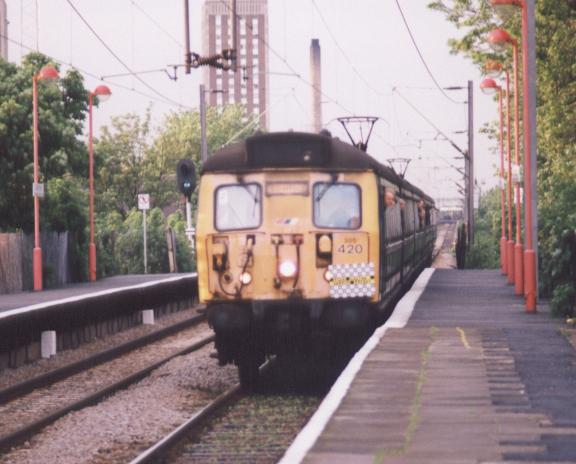 305420 (plus another unit) arrives at Silver Street (photo: Grahame Arnold)

Grahame Arnold comments that on Sundays in early 1993 due to engineering works InterCity substituted an IC125 with a 3-car DEMU on 2 workings from Brockenhurst to Reading. On 17.1.93 and 7.2.93 these workings carried a small inverted-triangle headboard 'the Inter-City DEMU'. The working on 7.2.93 also carried a second headboard 'Brockenhurst Flyer'. 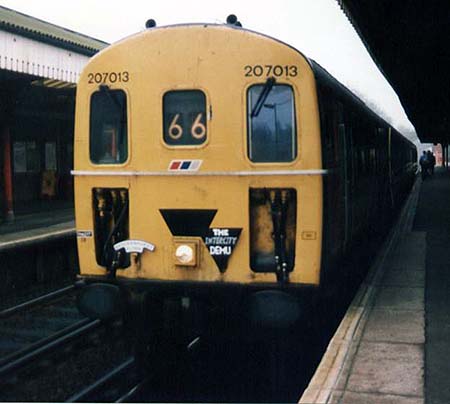 Vic Smith comments: The Mountain Express headboard was carried on a 1D33 09.52 Crewe–Holyhead sometime between 1984-1989. The headboard was fitted to the locomotive by staff at Crewe Diesel Depot. At Chester, Mr Peter Mountain, the BR Area Manager for Chester & North Wales Coast boarded the train for his weekly visit to Holyhead. Passengers were welcomed aboard the train announced as the Mountain Express service to Holyhead. He was accompanied by the Area Fleet Engineer and presented with the headboard on arrival at Holyhead. A large photograph of the class 47 with headboard arriving at Chester was displayed in the Area Fleet Engineers Office at Chester Wagon Shops whilst I was acting AFE in 1989.

The query : Can you help Patrick Moss identify this tour/train:
40104 : date unspecified, but pictured passing through Abergele with 'Vulcan Tribute' headboard and folks waving out the window. From other photos, it is certainly in around 1983-1984, and may possibly have been 29/8/84, but this is only a guess.

Photographed leaving Charing Cross on the 09.12 to Gravesend.

On DMU (no further details offered):

John Clifford comments: On 29.3.67 80146 carried a board 'The Last Steam Branch' while working the Brockenhurst - Lymington Pier trains on this day. It marked the withdrawal on steam working on the branch. I believe that 41312 also did the last 2 trips to Lymington carrying the same board.

David Beilby adds: I have been researching a photo and checked (from the July 1967 Railway Magazine) that the last steam train on the Lymington branch ran on 2nd April 1967.  The last steam workings were by 41312 but the photo I have is 80134 sporting the last steam branch headboard.  This is slightly different from the above. There are several different dates scattered around the internet - including a July one on the Lymington-Brockenhurst partnership site (You would think they would know)!

Mike Morant has provided a ticket from the last steam-hauled service train from London Paddington. Mike comments: This was actually a service train that was generally known as The Stockbrokers' Train. It normally terminated at Bicester but, on this one occasion, it waited in the loop north of Bicester station for an express to pass (a Brush 4 I think) whilst we all decamped for a wander around. Imagine that happening today! The return journey was up to the traveller and we came back on a DMU via Oxford after a visit to Banbury MPD. 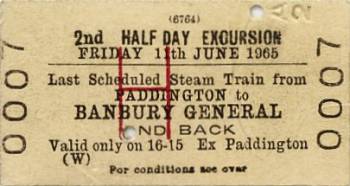 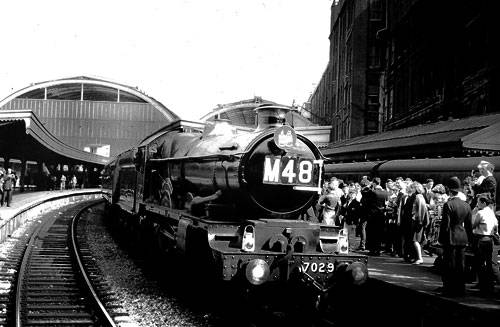 ...and Brian Burrows provided this shot of the train at Paddington.

John Clifford comments: I have seen a photo of 4-CEP 7110 leading the 07.40 London Victoria to Ramsgate carrying the headboard;

...to celebrate the centenary of the opening of the Herne Bay to Ramsgate line.

Chris Harley confirms the 7.05pm Much Wenlock to Wellington, hauled by 4178, carried a headboard proclaiming it to be "The Beeching Special". This was the last day of passenger service on this line.

Chris Harley comments that the 9am Yarmouth Beach to Birmingham New Street, hauled by 43161, carried a headboard "Thats Yer Lot" to mourn the passing of passenger services on the M&GN.

John Clifford has seen photographic evidence that the last train from Gosport to Fareham, hauled by 'Q' class 30546, carried a headboard declaring "THE LAST TRAIN".

Please use your back button to return to Six Bells Junction.